In China, women had different kinds of clothes in ancient times. Those clothes changed with the revolution of dynasties. For examples, in the 1920s, the Cheongsam was fashionable among socialites and upperclass women; during the 1960s, very austere clothes styles were prevalent; today, a wide variety of fashions are worn. Different provinces and regions of China also have different clothing styles.

In Qin and Han Dynasty, women usually wore loose clothes with long large sleeves. Under the long skirt was a pair of high-heeled clogs with some embroidery on them. There was usually a scarf called Jinguo wrapped on the arm of a noble woman while ordinary or poor women had no decoration on their arms. As time passed by, the coat tended to be shorter and the skirt became longer. Noble women even needed maids’ help to lift up the skirts to avoid the skirts being stained by the ground. In Wei and Jin Dynasty, clothes of the Han were greatly influenced by the Hu.[citation needed]Advantages of Hu's clothes were absorbed in the Han’s. Women usually wore waist-length coats and full-length skirts, and wrapped belts on their waists.

In Sui and Tang Dynasty, women’s clothes had the trend to be more open. Small-sleeves coats usually made of yarn, still long skirts, wide and long scarves were what they often wore. They could bare the part of body above their chests. This sort of cloth could show the beauty of women better. Another kind of clothes popular that time was something with big sleeves, short breasted shirts and long light skirts. They were used when women were walking in the garden, picking flowers, playing with their pets etc.

Banbi
Banbi also known as Banxiu is a form of waistcoat or outerwear that was worn over ruqun, and had half-length sleeves. The style of its collar varies but it can be secured at the front either with ties or a metal button. According to the Chinese records, banbi clothing style was invented from the short jacket that the Chinese wear. It was first designated as a waistcoat for palace maids but soon became popular amongst the commoners. In the "Legend of Huo Xiao Yu", written during Tang Dynasty, the main female character Huo Xiaoyu wears this style most of the time.

Chang'ao
Chang-ao is the traditional Chinese attire for women. It is a form of formal wear, and is often perceived as a longer version of ruqun. However, it was actually developed from zhiduo during the Ming Dynasty, and is worn over a skirt. It is wide-sleeved, shorter than zhiduo and has no side panels at the side slits (thus showing the skirt worn underneath). There is often an optional detachable protective huling (lit. "protect collar") sewn to the collar. The huling can be of white or any other dark colours. The collar is of the same colour as the clothing.

Daxiushan
Daxiushan , translated as "Large Sleeve Gown", is a traditional Chinese attire for women and was most popular during Tang Dynasty amongst the Royals. After the golden age of Tang Dynasty had ended, the influence of Hufu, or clothing styles from Central and Western Asia, gradually weakened and Tang royal women's clothing styles begin to take its transformation.

It was not until the Mid-Late Tang period that the distinctions between Royal women's clothing and other style have become increasingly obvious. The width has increased more than four feet and its sleeve is often wider than 1.3 metres. It features distinctive rode that covers from ground to just above the chest with knot wrapped around the waist, a light and sometimes visible outer coat that ties together at the bottom and often goes along with a long scarf wrapped around the arm. The clothing often, only cover half of women's breast and so, it is restricted to people of certain status, like princess or gējī. It has come to be known as Da-Xiu-Shan but have been called Dian-Chai-Li-Yi at various times. The clothing was mainly worn for special ceremonial occasions and have different variations, mainly result of different collar formations (e.g., parallel or cross collar or those with no collar).

Diyi
Diyi is the traditional Chinese attire worn by empresses and crown princesses (wife of crown prince) in the Ming Dynasty. It is a formal wear meant only for ceremonial purposes. It is a form of shenyi, and is embroidered with long-tail pheasants and circular flowers. It is worn with phoenix crown (without the dangling string of pearls by the sides). Diyi has been worn by empresses and other royal noblewomen (differs according to different dynasties) since the Zhou Dynasty under various names like huiyi in Zhou and Song Dynasty, and miaofu in Han Dynasty.

Lotus shoes
Lotus shoes are footwear that were worn by women in China who had bound feet. The shoes are cone or sheath-shaped, intended to resemble a lotus bud. They were delicately constructed from cotton or silk, and small enough to fit in the palm of a hand. Some designs had heels or wedge-shaped soles. They were made in different styles and colors, and were typically ornately decorated, with embroidered designs of animals or flowers that could continue on the sole of the shoe. Some designs only fit over the tip of the foot, giving the illusion of a small bound foot when worn under a long skirt. Though foot binding is no longer practised, many lotus shoes survive as artifacts in museums or private collections.

Phoenix crown
A Phoenix crown is a Chinese traditional headgear for women. It was worn by noblewomen in the Ming Dynasty on ceremonies or official occasions. It is also the traditional headgear for brides. It is adorned with gold dragons, phoenixes made with kingfisher feathers, beaded pheasants, pearls and gemstones. The number of pearls used ranged from 3426 to 5449 pieces, while the number of gemstones used range from 95 to 128 pieces. These pearls, gemstones and more kingfisher feathers are made into ornamental flowers, leaves, clouds, and bobin. The weight of the entire crown range from 2 to 3 kilograms.

Ruqun
Ruqun is an item of traditional Chinese attire (Hanfu) primarily for women. It consists of a blouse and a wrap-around skirt. It has a long history, and has been worn by women since the Warring States period. Generally, the blouse was tucked into the skirt. The popularity of ruqun declined during the Han Dynasty, but increased again during the Southern and Northern Dynasties. During the Sui and Tang Dynasty, the skirts were tied higher and higher up the waist, until they were eventually tied above the breasts, worn with short blouses. In addition to the normal crossed-collar blouses, parallel/straight-collar blouses were also worn in this period, thus exposing the cleavage of the breasts. During the Song Dynasty, the skirts were eventually lowered from the breast level back to the normal waistline.

By the Ming Dynasty, ruqun became the most common form of attire for women. The sleeves of the blouse are mostly curved with a narrow sleeve cuff. There is often an optional detachable protective huling sewn to the collar. The huling can be white or any other dark colours. The collar is of the same colour as the clothing. Towards the start of the Qing Dynasty, the skirt was mostly baizhequn or mamianqun.

Song Dynasty
A painting of court ladies and one man on horseback, dressed in upper class outing apparel, a 12th-century painting by Li Gonglin, as well as a remake of an 8th-century original by Tang artist Zhang Xuan.

The attire of women during the Song Dynasty (960 - 1279) was distinguished from men's clothing by being fastened on the left, not on the right. Women wore long dresses or blouses that came down almost to the knee. They also wore skirts and jackets with short or long sleeves. When strolling about outside and along the road, women of wealthy means chose to wear square purple scarves around their shoulders. Ladies also wore hairpins and combs in their hair, while princesses, imperial concubines, and the wives of officials and wealthy merchants wore head ornaments of gold and silver that were shaped in the form of phoenixes and flowers.

Cheongsam
The cheongsam is a body-hugging (modified in Shanghai) one-piece Chinese dress for women; the male version is the changshan. It is known in Mandarin Chinese as the qípáo. Wade-Giles ch'i-p'ao, and is also known in English as a mandarin gown. The stylish and often tight-fitting cheongsam or qipao (chipao) that is most often associated with today was created in the 1920s in Shanghai and was made fashionable by socialites and upperclass women.

1960s
Around the Cultural Revolution, almost anything seen as part of traditional culture would lead to problems with the Communist Red Guards. Items that attracted dangerous attention if caught in the public included jeans, high heels, Western-style coats, ties, jewelry, cheongsams, and long hair. These items were regarded as symbols of bourgeois lifestyle, which represented wealth. Citizens had to avoid them or suffer serious consequences such as torture or beatings by the guards. A number of these items were thrown into the streets to embarrass the citizens.

Modern era
Chinese fashion has drastically changed over time. Following the relaxation of communist clothing standards in the late 70s, the way Chinese dressed and the fashion trends of the country were also changing. Contemporary urban clothing seemed to have developed an obsession with brand names. In major urban centers, especially Shanghai, an increased western look is preferred, and there is an emphasis on formal wear over casual wear for adults on the streets. Teenagers prefer brand names and western clothing. Children usually wear clothes decorated with cartoon characters. However, there is also effort by the hanfu to revive traditional clothing forms such as the hanfu by the hanfu movement. At an Asia-Pacific Economic Cooperation summit in Shanghai in 2001, the host presented silk-embroidered tangzhuang jackets as the Chinese traditional national costume.

As mobile ends (mobile and pad) become increasingly popular, they jump into the top 3 on the list of channels assess to fashion information, following with internet and fashion magazines. For the place to buy the fashion products, offline stores still the predominant way which takes more than half of the market share. 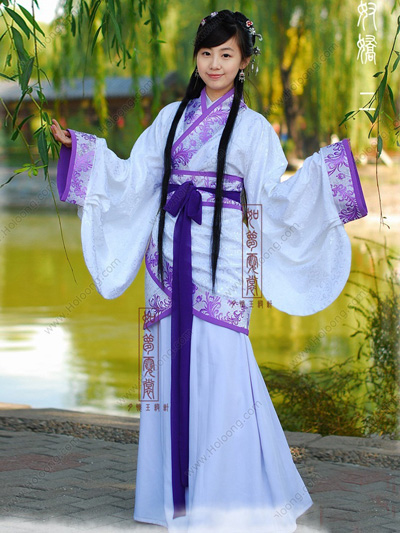 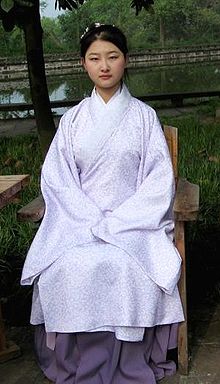