Traditional Azerbaijani dress has developed as a result of long processes of material and religious culture of Azerbaijani people. It is closely connected to its history and reflects its national specification.

Ethnographic, historic and artistic features of the national creativity, which were also used in creation of determined forms of it, are reflected on costumes. Azerbaijani arts reminds about itself also in ornaments of costume with artistic embroideries, in weaving and knitting. 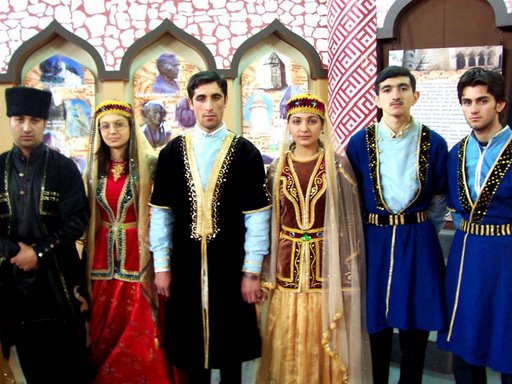 In the 17th century, the territory of modern Azerbaijan was considered the main sericulture oblasts of the Near East and Shirvan was the main region of sericulture. Silks were produced in Shamakhi, Basqal, Ganja, Shaki, Shusha and in other regions. Fine textiles, silk head kerchiefs for women with ornaments of amazing beauty and others were produced in these cities.

Style of clothes reflected marital status and age of its owner. For example, costume of a girl and a married woman were differed. Young women wore more colorful and beautiful dresses. 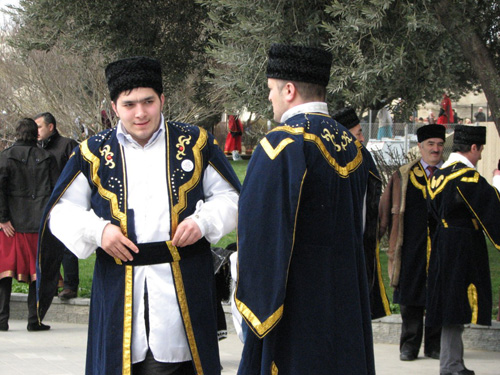 Women's wear
National female costume of Azerbaijanis consists of outwear and underwear. It includes suck-formed shawl – “chadra” and a veil – “rubend”, which was worn by women while going outdoors. Outwear was sewed of bright and colorful textiles, the quality of which depended on income of the family. The clothing also included variety of different jewelries. Golden and silver beads, buttons, stylized as a big seeds of hordeum, coins, delicate pendants and necklaces. Unlike elders young women wore more bright clothes with bright flowers.
Outwear consists of a shirt with wide sleeves and wide trousers to the ankle and bell-shaped shirts of the same length. Women also wore a knitted shirt with long sleeves (arkhalig, kuladja) tightly fitting across the back and chest, which had a wide slit at the front. At the waist it was tightly belted, but below it was parted by gatherings. A quilted sleeveless jacket was worn in cold weather. Outerwear could be a cloak that was longer than the shirt. Women’s shirts in Gazakh uyezd were long with slits on each side.
Women of Karabakh wore chepken (chafken) that was tight-fitting to the waist and with long hidden sleeves.
Wide skirts and also tight and wide pants existed. Short, to the knee, shirts were worn in Nakhchivan. In Shusha, Shamakhi and other districts shirts were longer.
Long kulajs were worn only by rich women in Nakhchivan and Ganja. 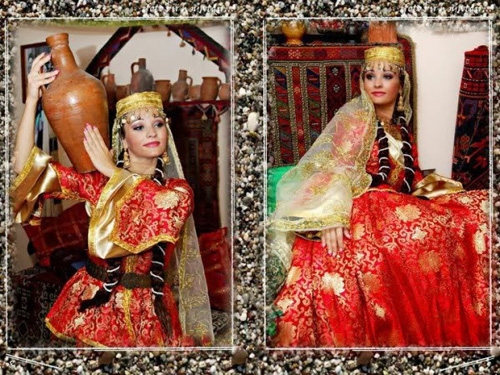 Azerbaijani traiditional costume with a very beautiful headdress. The dress and headgear are embellished with intricate metal decorations and gems 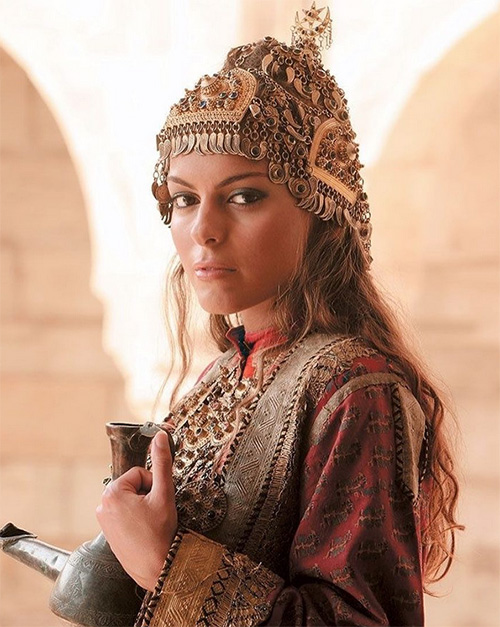 Women’s folk clothing from Azerbaijan. Azerbaijani female garments are often adorned with gold embroidery and gold or silver coins. This costume is a replica, so there is no real gold on it. 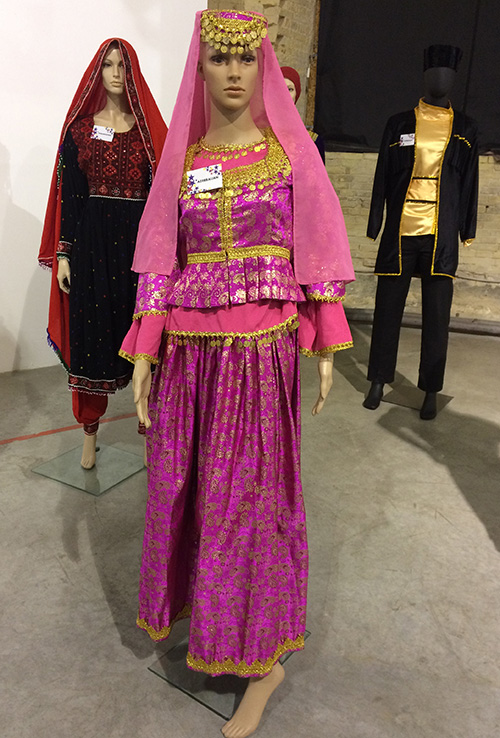 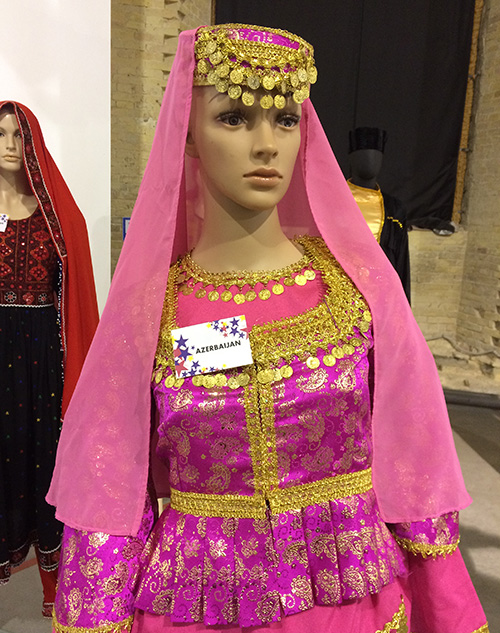