What is Tartan and what does it mean for Scotland

What is Tartan and what does it mean for Scotland

Tartan is a pattern consisting of criss-crossed horizontal and vertical bands in multiple colors. Tartans originated in woven wool, but now they are made in many other materials. Tartan is particularly associated with Scotland. Scottish kilts almost always have tartan patterns. Tartan is often called plaid in North America, but in Scotland, a plaid is a tartan cloth slung over the shoulder as a kilt accessory, or a plain ordinary blanket such as one would have on a bed.

Tartan is made with alternating bands of colored (pre-dyed) threads woven as both warp and weft at right angles to each other. The weft is woven in a simple twill, two over — two under the warp, advancing one thread each pass. This forms visible diagonal lines where different colors cross, which give the appearance of new colors blended from the original ones. The resulting blocks of color repeat vertically and horizontally in a distinctive pattern of squares and lines known as a sett.

The Dress Act of 1746 attempted to bring the warrior clans under government control by banning the tartan and other aspects of Gaelic culture. When the law was repealed in 1782, it was no longer ordinary Highland dress, but was adopted instead as the symbolic national dress of Scotland.

Until the middle of the nineteenth century, the highland tartans were only associated with either regions or districts, rather than any specific Scottish clan. This was because like other materials tartan designs were produced by local weavers for local tastes and would usually only use the natural dyes available in that area, as chemical dye production was non-existent and transportation of other dye materials across long distances was prohibitively expensive.

The patterns were simply different regional checked-cloth patterns, chosen by the wearer's preference – in the same way as people nowadays choose what colors and patterns they like in their clothing, without particular reference to propriety. It was not until the mid-nineteenth century that many patterns were created and artificially associated with Scottish clans, families, or institutions who were (or wished to be seen as) associated in some way with a Scottish heritage. The Victorians' penchant for ordered taxonomy and the new chemical dyes then available meant that the idea of specific patterns of bright colors, or "dress" tartans could be created and applied to a faux-nostalgic view of Scottish history.

It is generally stated that the most popular tartans today are the Black Watch (also known as Old Campbell, Grant Hunting, Universal, Government) and Royal Stewart. Today tartan is no longer limited to textiles, but is used on non-woven mediums, such as paper, plastics, packaging, and wall coverings.

Construction
Each thread in the warp crosses each thread in the weft at right angles. Where a thread in the warp crosses a thread of the same color in the weft they produce a solid color on the tartan, while a thread crossing another of a different color produces an equal mixture of the two colors. Thus, a sett of two base colors produces three different colors including one mixture. The total number of colors, including mixtures, increases quadratically with the number of base colors so a sett of six base colors produces fifteen mixtures and a total of twenty-one different colors. This means that the more stripes and colors used, the more blurred and subdued the tartan's pattern becomes.

The sequence of threads, known as the sett, starts at an edge and either repeats or reverses on what are called pivot points. In diagram A, the sett reverses at the first pivot, then repeats, then reverses at the next pivot, and will carry on in this manner horizontally. In diagram B, the sett reverses and repeats in the same way as the warp, and also carries on in the same manner vertically. The diagrams left illustrate the construction of a "symmetrical" tartan. However, on an "asymmetrical" tartan, the sett does not reverse at the pivots, it just repeats at the pivots. Also, some tartans (very few) do not have exactly the same sett for the warp and weft. This means the warp and weft will have alternate thread counts.

The shades of color in tartan can be altered to produce variations of the same tartan. The resulting variations are termed: modern, ancient, and muted. These terms refer to color only. Modern represents a tartan that is colored using chemical dye, as opposed to natural dye. In the mid-19th century natural dyes began to be replaced by chemical dyes which were easier to use and were more economic for the booming tartan industry. Chemical dyes tended to produce a very strong, dark color compared to the natural dyes. In modern colors, setts made up of blue, black and green tend to be obscured. Ancient refers to a lighter shade of tartan. These shades are meant to represent the colors that would result from fabric aging over time. Muted refers to tartan which is shade between modern and ancient. This type of tartan is very modern, dating only from the early 1970s. This shade is said to be the closest match to the shades attained by natural dyes used before the mid-19th century.

The idea that the various colors used in tartan have a specific meaning is purely a modern one. One such myth is that red tartans were "battle tartans", designed so they would not show blood. Many recently created tartans, such as Canadian provincial and territorial tartans and American state tartans, are designed with certain symbolic meaning for the colors used. For example the color green sometimes symbolizes prairies or forests, blue can symbolize lakes and rivers, and the color yellow is sometimes used to symbolize various crops.

Clan tartans
It is generally regarded that "clan tartans" date no earlier than the beginning of the 19th century, and are an example of an invented tradition. It is maintained by many that clan tartans were not in use at the time of the Battle of Culloden in 1746. The method of identifying friend from foe was not through tartans but by the color of ribbon worn upon the bonnet. David Morier's well-known painting of the Highland charge at the Battle of Culloden shows the clansman wearing various tartans. The sets painted all differ from one another and very few of those painted show any resemblance to today's clan tartans. Contemporary portraits show that although tartan is of an early date, the pattern worn depended not on the wearer's clan, but upon his or her location, or personal taste. The idea of groups of men wearing the same tartan is thought to originate from the military units in the 18th century. Evidence suggests that in 1725 the Independent Highland Companies may have worn a uniform tartan.

The naming and registration of official clan tartans began on 8 April 1815, when the Highland Society of London (founded 1778) resolved that all the clan chiefs each "be respectfully solicited to furnish the Society with as Much of the Tartan of his Lordship's Clan as will serve to Show the Pattern and to Authenticate the Same by Attaching Thereunto a Card bearing the Impression of his Lordship's Arms." Many had no idea of what their tartan might be, but were keen to comply and to provide authentic signed and sealed samples. Alexander Macdonald, 2nd Baron Macdonald of Sleat was so far removed from his Highland heritage that he wrote to the Society: "Being really ignorant of what is exactly The Macdonald Tartan, I request you will have the goodness to exert every Means in your power to Obtain a perfectly genuine Pattern, Such as Will Warrant me in Authenticating it with my Arms."

Today tartan and "clan tartan" is an important part of a Scottish clan. Almost all Scottish clans have several tartans attributed to their name. Several clans have "official" tartans. Although it is possible for anyone to create a tartan and name it any name they wish, the only person with the authority to make a clan's tartan "official" is the chief. In some cases, following such recognition from the clan chief, the clan tartan is recorded and registered by the Lord Lyon King of Arms. Once approved by the Lord Lyon, after recommendation by the Advisory Committee on Tartan, the clan tartan is then recorded in the Lyon Court Books.In at least one instance a clan tartan appears in the heraldry of a clan chief and is considered by the Lord Lyon as the "proper" tartan of the clan.

Other tartans
In addition to clan tartans, there are many tartans created especially for individuals, families, districts, institutions, and corporations. There are even specific commemorative tartans for various events and certain ethnic groups. Tartan has had a long history with the military and today many military units — particularly those within the Commonwealth — have tartan dress uniforms.

Tartan is sometimes differentiated from another with the same name by the label dress or hunting. Dress tartans are based on the earasaid tartans worn by Highland women in the 17th and 18th centuries. Dress tartans tend to be made by replacing a prominent color with the color white. They are commonly used today in Highland dancing. Hunting tartans are also a Victorian conception. These tartans tend to be made up of subdued colors, such as dark blues and greens. Despite the name, hunting tartans have very little to do with actual hunting. Mourning tartans, though quite rare, are associated with death and funerals. They are usually designed using combinations of black and white.

Tartan has also been used by corporations in advertising campaigns. British Airways used a tartan design as part of its ethnic tailfin re-branding. This design, Benyhone (from Scottish Gaelic: "Mountain of the birds") was one of the most widely used designs, being applied to 27 aircraft of the BA fleet. The "Burberry Check", first designed in early 1920s, is an instantly recognisable tartan, known around the world.

Clever Victorian entrepreneurs not only created new tartans, but new tartan objects called tartanware. Tartan was incorporated in an assortment of common household objects, such as snuffboxes, jewellery cases, tableware, sewing accessories, and desk items. Tourists visiting the Scottish Highlands went home with it, and Scottish-based businesses sent tartanware out as gifts to customers. Some of the more popular tartans were the Stewart, McDonald, McGregor, McDuff, MacBeth and Prince Charlie. Today tartanware is widely collected in England and Scotland. 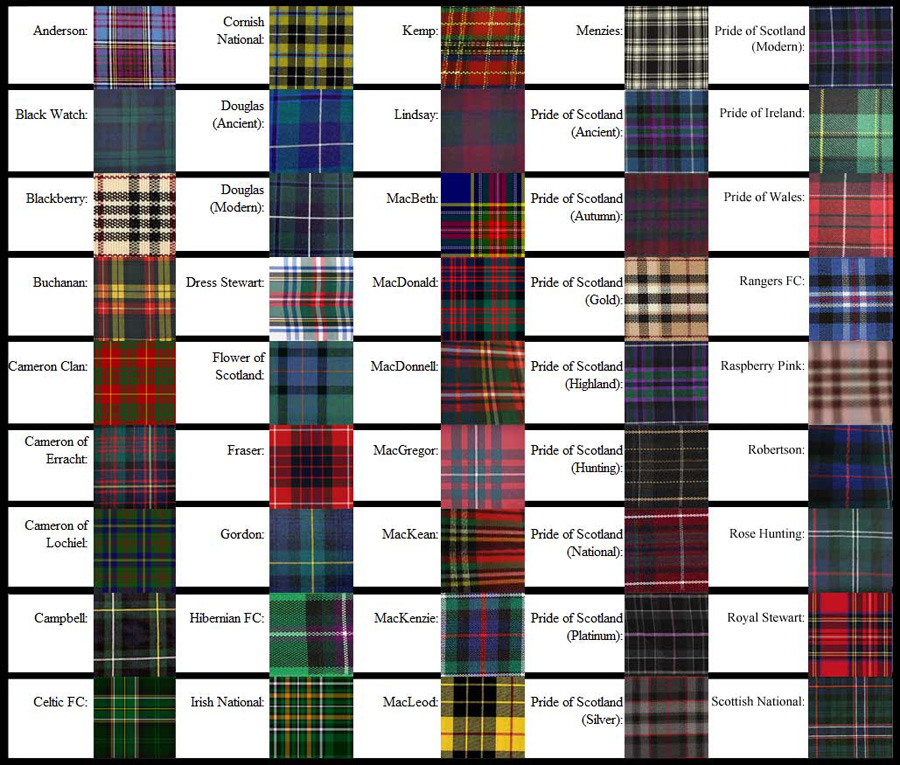