Gákti, a part of clothing worn in Northern Europe

Gákti, a part of clothing worn in Northern Europe

Gákti is the Northern Sámi word for a piece of traditional clothing worn by the Sámi in northern areas of Norway, Sweden, Finland and the Kola Peninsula in Russia. The gákti is worn both in ceremonial contexts and while working, particularly when herding reindeer. The traditional Sami costume is characterized by a dominant color adorned with contrast colored bands, plaits, pewter embroidery, tin art, and often a high collar. In the Norwegian language it is called 'kofte', most probably due to the word "gákti" being somewhat similar to the word 'kofte' in the accusative, genitive, locative and comitative case.
The colors, patterns and the jewelry of the clothing can signify if a person is single or married and where the person is from. There are different gákti for women and men; men's gákti have a shorter "skirt" than women's. Traditionally the gákti was made from reindeer leather, but now it's more common to use wool, cotton or silk. The gákti can be used with a belt (pleated, quilted or with silver buttons), silver jewellery, traditional leather footwear and a silk scarf. It is also a tradition that if your buttons on the belt are square, it shows that you are married. If they are round, you are single/not married yet. If a married couple divorce, and the ex-husband continue to use the Sami costume made by his ex-wife, he signals that he still wants her. 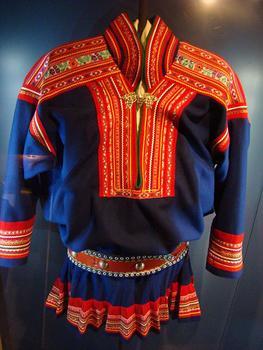