The ceinture fléchée is a type of colorful sash, a traditional piece of French-Canadian clothing of the 19th century (of the Lower Canada, Canada East and early confederation eras). The Métis also made ceintures fléchées and use them as part of their national costume. According to Dorothy K. Burnham who prepared an exhibit on textiles at the National Gallery of Canada in 1981, and published an accompanying catalogue raisonné, this type of finger weaving was learned by the residents of New France from the indigenous peoples.

History
In Quebec, this wool sash was used by men to tie jackets around their waists to prevent the cold from creeping in. It was a both practical and fashionable accessory, worn by both the bourgeois and the habitant classes. The width of a traditional belt can be 15 centimetres to 25 centimetres, and its length can easily be more than 2 metres. The ceinture also had a practical use: it helped prevent back injuries or hernias amongst the fur traders of the time.

It is adorned by an arrowed pattern and was worn around the winter coats of the time. It is also a symbol of the Lower Canada Rebellion and the Quebec Winter Carnival, as it is worn by the festival mascot, Bonhomme Carnaval. Imitations are sold and seen throughout the carnival. The belt is represented in a number of artistic creations, such as the illustration Le Vieux de '37 by Henri Julien, the painting L'Assemblée des six-comtés by Charles Alexander Smith and the song Mon Pays, suivi du Reel des Aristocrates from néo-trad musical band Les Cowboys Fringants.

The arrow sash was part of the traditional costume of the Lower Canada habitant at least from 1776 on. Although at that time the British visitors and the German mercenaries who noticed its presence called it a "coloured sash". That is what Thomas Anbury called it when he wrote his account of travel after his visit to Charlesbourg and Beauport in 1776. In 1777, Charlotte Luise de Riedesel, arriving from Germany to rejoin her husband, Major-General Frederick, related that when she met him in Chambly, he was wearing a red and blue sash with fringes over the traditional Canadian costume to keep him warm as he was still suffering from influenza. That same year, a German mercenery lodged at Sainte-Anne related how people in their home were weaving the colored sashes using their domestic wool. In 1778, E.V. Germann made a drawing showing clearly a Canadian peasant wearing his sash, the design was a chevron. That drawing is a proof of what is written by others. Elisabeth Simcoe who lived in Quebec city in 1792 for more than a year wrote about the Canadians, "(…) their coats are tied round with a coloured sash."

When in 1798, the corpse of a drowned voyageur was found along the St. Lawrence River, in Verchères, Labadie wrote in his personal diary that the voyageur was wearing "…une jolie cinture à flesche" Also in 1798, the inventory after death of Mrs Chaboillez, whose husband, Charles, was one of the founders of the Beaver Club, numbered "deux cintures à flesches". In 1806, the British John Lambert after having visited many villages wrote that five habitants out of six wore a colored sash. He even specified that sometimes the sash was decorated with pearls. The sash was changing in its design, but this cannot be attributed to anyone in particular.

The coloured sash was brought to western Canada by the men working for the North West Company. These voyageurs wore their sashes when leaving Lower Canada and travelling for the fur company. Their sashes attracted the attention of several nations with whom they exchanged goods and soon these people wished to possess such sashes. The company then had many sashes woven in Montreal and area with the fine worsted wool it imported from England. Beside the NWC, the Hudson's Bay Company also became interested in that barter article. One of its agents made a request to satisfy that wish. He wrote : "…worsted of colour to make sashes of the latter I have got sample of from my neighbour which will send home". His neighbour was Charles Boyer of the NWC. The sashes adopted by the Indians and the Métis, sons of the voyageurs, are still favoured. They even name it their identity symbol. However, quite often the so-called Métis sashes are not the authentic hand-woven sashes but the kind woven on loom in England probably to meet the requests at lower cost. This can be read in the HBC archives.

The design of the sash continued to be modified and finally became a standard type that was mainly produced in L'Assomption region around 1835, according to the historian Mason Wade. The HBC agents who came to collect them at Fort Assomption named these sashes lassomption or l’Assomption sash in the accounting books.

Despite its great popularity in Lower Canada as well as in the West, there was a slow-down in its production. That was probably due to the decline of the fur trade in 1870 and in part to the suggestion of the parish priest Tancrède Viger to the weavers, to stop producing, considering them very badly paid for their work.

Sashes were worn by snow-shoers and by retired fur traders who took residence in Montreal and area. Many artists left drawings, paintings and sketches confirming the popularity of the sash. A few women continued weaving sashes and ensured the handing-down of the craft to other generations and the current one.

Marius Barbeau was very interested in ceinture fléchée trying to find its origin. He did not, but left many clues to learn more of its presence, popularity if not its origin. E.Z. Massicotte, archivist at Montreal City Hall and folklorist, continued Barbeau's research and concluded: "la ceinture fléchée un chef d’œuvre de l’industrie domestique du Canada". Yet no such type of diagonal weaving is known elsewhere in the world, let alone in France. It seems that Native Americans were quick to improve their techniques upon the discovery of brightly coloured yarns that they did not have access to previous to contact, and often took apart fabrics to reuse the yarn for sashes, and a photo of an example is shown in Burnham's book. Since 1968 many persons learned to hand weave ceintures fléchées though not all kept weaving sashes, many taught the craft and are spreading its knowledge. Many popular singers, folklore dancers and especially Bonhomme Carnaval are contributing to make it known to visitors and in various countries.

Fabric-making process
Many steps are required in the creation of a ceinture fléchée (also known as an "Assomption sash"). First, the craftmaker picks the wool threads that he needs. The threads have to be long enough so that the person who will wear the sash can pass it twice around the waist. The craftmaker needs to add the length of the fringes at each end of the belt. The fringes are used to tie the arrow sash.

After that, the craftmaker organizes the threads and weaves them to create designs of lightning bolts (zigzags), flames (lozenges) and arrow heads (often in the middle of the sash). Finally, to make the fringes, the craftmaker finishes the belt by making twists or braids with the length of thread that remains.

In the creation of a perfect ceinture fléchée or the intricate beadwork designs that would adorn various artifacts a hard callus develops on the tips of the finger. This is referred to as a "needle finger". It is considered a "rite of passage" for young girls and is acknowledged by the matriarchs in the family. 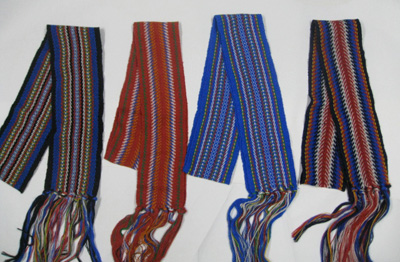