Sbai, Sabai, or Pha biang is shawl-like garment, or breast cloth worn in Mainland Southeast Asia. The term Sabai is used for a woman's silk breast wrapper in Cambodia, Siam, Southern Siam, Isan and Laos while in Coastal Sumatra it described as Shouldercloth. "Sabais can also be used by men in Lao weddings or when attending religious ceremonies. The type of sabai typically worn by Lao men often has checkered patterns. Sabai also well known as a long piece of silk, about a foot wide, draped diagonally around the chest cover one shoulder which its end drop behind the back".

The Sabai had noted as Cambodia's national costume tie with its ancient's Sampot and Chang Kben.

History
Along with the shoulder sash, selendang of Malay and sabai of Cambodia may have been derived from the Indian garment called a sari, the end of which is worn over one shoulder, concluded that most of today Southeast Asia countries were under Indianized kingdoms.

There are a related mythology in Khmer culture, retained a history of sabai which can likely to be invent since 1st century of Funan era in Cambodia's history. Preah Thaong and Neang Neak, a legend which shares a common with the founder of Funan era as the two main characters were recognize the similarity to Queen Soma, a first leader of Cambodia and a Brahmin Kaundinya. It discovered with the tales in the scene when Preah Thong clings to a piece of cloth known as sabai worn on the nagini in order to make the journey to the Nāga's kingdom. In that tale, sabai is symbolic to Neang Neak, the naga princess's tail. For instance, there is an important little rite within the marriage ceremony called Preah Thong Taong Sbai Neang Neak,a symbolic representation of the legend as the groom must to hang the bride's Sabai, follows to the room for honeymoon.

However, according to the most bas belief blooming around the temple since the beginning of Khmer Empire rule, most of Apsara had seem to upper nude worn only Khmer traditional sarong kor and their style of Sampot. This illustration had announced that those temple was built in order to blessing the Hindism in culture as the unique Buddhism temple, Bayon introduced a small part of carving which not look like of Apsara but the ruler's wife or concubine worn the traditional Sabai across its left shoulder, the same as what is worn today. The issue had depicts that sabai may present the clothing of Buddhism refer to the similar way of clothing of Buddhism monk which cover its garment across one shoulder.

The evidence started to totally correct after a Khmer King required to stop the Hindism in country and avoided to catch Buddhism especially Theravada for the nation's religion. Began from Ponhea Yat of Chatomok era, the court lady had known to worn the sabai which had transformed into a decoration shoulder shawl lately since the flourish of Siam Kingdom which heavily adapted Khmer culture into their own. 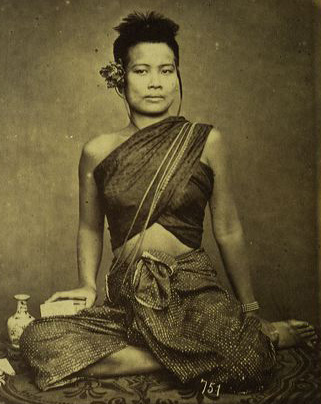 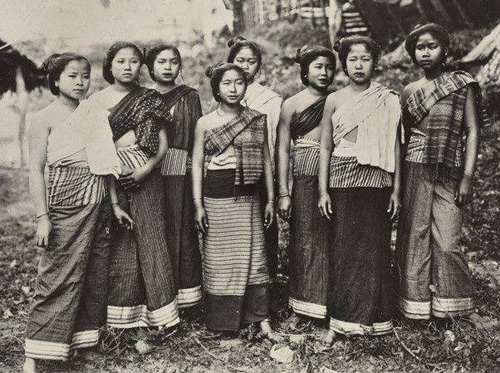