The guayabera is a men's shirt popular in Cuba, Mexico, Central America, the Caribbean, Southeast Asia, and throughout Africa. It is also known as a "Wedding Shirt".

History
The origin of the garment is a somewhat of a mystery, thought to be the result of a mixture of Native American and Spanish styles, developed in the late 18th or early 19th centuries. Various claims for the distinctive style have been made, from Mexico to other Latin American countries to the Philippines.

A version of the shirt's origins claims that Mexicans originated it in either the state of Veracruz or the Yucatán Peninsula. One theory holds that it was during the era of trade routes through the Caribbean that the Mexican shirts got to Cuba, and were taken to the Philippines by the Spaniards, where the evolution of the intricate embroidery started. Alternatively, others speculate that the shirt, which has documented origins in the Philippines prior to the arrival of the Spanish, made its way to Cuba through Mexico via the Manila-Acapulco galleon trade. The origin of the Guayabera shirt remains a mystery, and a similar prototypical shirt has existed since the 18th century, probably imported from Spain.

Guayabera may come from a Cuban legend that tells of a poor countryside seamstress sewing large patch-pockets onto her husband's shirts for carrying guava (guayabas) from the field.Guayabera may also have originated from the word yayabero, the singular nickname for those who lived near the Yayabo River in Cuba.

Though commonly called guayabera, in the Mexican state of Yucatán, it is also known as camisa de Yucatán. In 2010, Cuba declared the guayabera shirt to be its "official formal dress garment".

Others claim the origin to be from Bani, Dominican Republic, also for the harvesting of guayaba fruit in the region. This theory explains the movement to Cuba, through Máximo Gómez, which used this type of shirt.

Design
The guayabera shirt is distinguished by several details: either two or four patch pockets and two vertical rows of alforzas (fine, tiny pleats, usually ten, sewed closely together) running along the front and back of the shirt. The pockets are separately detailed with identical, properly aligned alforzas.

The top of each pocket is usually adorned with a matching shirt button, as are the bottoms of the alforza pleats. Vertical rows of adjusting buttons are often seen, one on each side, at the bottom hem. While most versions of the design have no placket covering the buttons, a few newer designs do.

The bottom of many shirts has slits on either side, and these include adjusting buttons. The bottom has a straight hem, thus it is not tucked into the trousers.

Though traditionally worn in white and pastels, guayaberas are now available in many solid colors. Black guayaberas, embroidered with colorful flowers and festooned with French cuffs, have for many decades been extremely popular in Mexico. In Mexico, the Dominican Republic, Puerto Rico and Cuba, guayaberas are part of the traditional wear for men, and may be considered formalwear in some situations.

The shirt-jac (also known as a "jac" for short, or a "summer jac") has become a popular clergy shirt since the 1980s. These shirts are simpler than a guayabera, avoiding the design details such as pleats. Many clerics purchase fine guayabera shirts and have the collars re-tailored into clerical collars.

Similar shirts
British and Americans have been wearing versions of the guayabera for many generations. Known as "safari shirt" in Britain and "camp" (or "jac") shirt in the U.S., their popularity first became quite notable in the 1930s. As in the Caribbean countries, Americans found the shirt to be acceptable office/business wear during extremely hot weather. Previously, Americans had only worn such shirts during their leisure time. In the UK (especially the colonies) and US, a plain form of safari shirt also became popular.

The real "safari shirt" is usually made of stronger material (less light weight), and has gussets in the back to provide more flexibility. This shirt has upper pockets. The safari shirt is confused herein with a safari jacket/bush jacket which is a single layer, long sleeved and long square tailed affair often made iconic by film directors and seen in photos of Ernest Hemingway. The jacket has lower open pockets and is worn open (not buttoned); it sometimes serves as a photographer's jacket. Both shirt and jacket signature color is tan.

Clergy shirts, as a variant of the British safari, have been worn for many decades and are common.

The Philippines' national costume for men, the Barong shirt has some features which are similar to the guayabera. However, the Barong Tagalog is a much more formal piece of clothing. It lacks pleats or pockets, and is marked by intricate, hand-sewn embroidery in a variety of forms, including geometric or floral patterns. It is not made of linen, but rather of hand-woven, fine, translucent pina or jusi fiber.

In the Samoan islands the shirt style has been introduced into the masculine formal attire known as the "safari set". American Samoa's version of the shirt often includes tightly-sewn vertical pleats and two or four buttoned pockets. 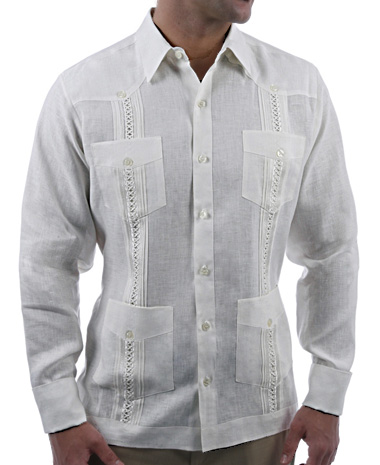 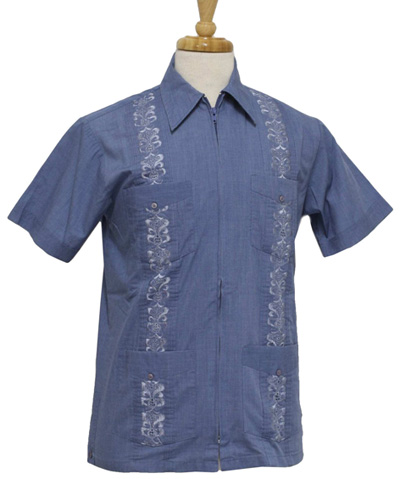