The Chokha is part of the traditional male dress of the peoples of the Caucasus.

Types of Chokha
There are Four types of Chokha: Kartl-Kakheti chokha (Kartli and Kakheti are eastern Georgian provinces), Khevsur Chokha (mainly in Mtskheta-mtianeti province of Georgia), Adjarian chokha (mainly found in western Georgia provinces such as Adjara and Guria and also used to be used in Lazona that is now part of republic of Turkey, it is shown in fourth picture on this page) and General Caucasian chokha which most likely to Kartl-Kakheti chokha and is little longer version of it.

Caucasian Chokha originated in Caucasus in mountainous sites of Georgia, though the word "Chokha" isn't in Georgian language but from Persian. Originally the cloth in Georgia was referred as Talavari but later on after Persian invasions in Georgia, Persians called Georgian national dress Chokha (meaning fabricly made outfit). The name of the cloth mostly known as "chokha", the Russians who came to the Caucasus through Circassia called it "Cherkeska" (meaning Circassian dress), and the Cossacks adopted it as their national cloth. In Circassian Language Chokha is known as "Shwakh-Tsia"" which means "covers the horseman" or simply "Tsia" which means "from fabric" and "Fasha" which means "Fits you". The authentic Caucasian Chokha became instantly popular in entire Caucasus, it derived from caucasus and has been commonly used in Southern and Northern slopes of it. In earlier Georgian records Chokha was mostly referred as Talavari.

In Georgia, the Black chokha was reserved to the "Order of Chokhosani" who represented the elite society of the citizens. These were people with special dedications such as: Great generals, heroes or some of the famous poets and the people who had done some big service to the country. Not even all of Lords were allowed in "Chokhosani Orden" and those who did proudly represented this rank in their Garbs. Chokha is sewn of thick fabric and flares out at the bottom. In some parts of the Caucasus there are also female chokhas.

In the late 19th century and early 20th century there were three types of chokhas: the Khevsur chokha, the Kartl-Kakheti chokha and general Caucasian chokha.

Kartl-Kakheti Chokha
The Kartl-Kakheti chokha is longer than the Khevsur chokha and has triangle-like shapes on the chest exposing the inner cloth called arkhalukhi. It tends to have bandoliers on both sides of the chest, spaces filled with bullet-like decorations called Masri. The bottom sides usually had cuts on the sides and people wore it usually without belts. The Kartli-Kakheti chokha has long sleeves and mostly is black, dark red and blue.

General Caucasian Chokha
The general Caucasian chokha shares similarities with the Kartl-Kakheti version. In most cases different decorations are used to fill the bullet spaces. In the Russian language, chokha is called cherkeska and this type of chokha has black leather belts decorated with silver pieces. It was usually a longer version of Kartl-kakheti Chokha.

The general Caucasian chokha is mostly made of black, grey, white, blue, red or brown fabric. Among Azeris, it is considered part of the traditional outfit for the performers of mugham, an Azeri folk music genre. A person's age defined the colour of the chokha he would wear.

Generally, the chokha outfit includes a khanjali (the sword), the akhalukhi (a shirt worn underneath the chokha), the masrebi (the bullets), and the kabalakhi (a hood, separate from the robe) or nabdis kudi (a tall fur hat). 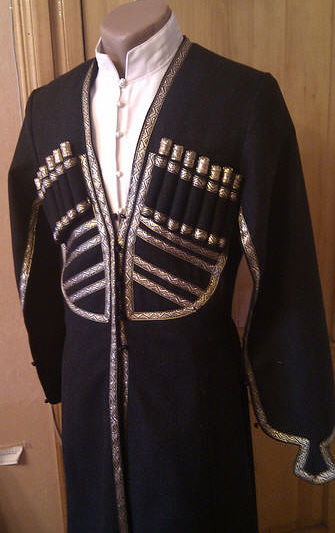 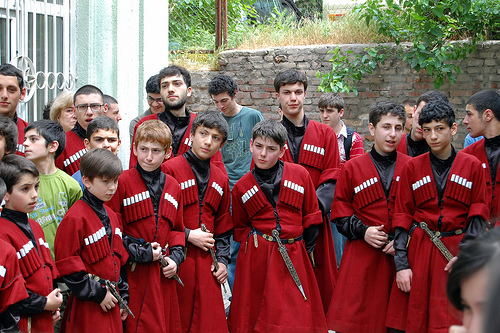