Croatian national costume refers to the traditional clothing worn by Croats living in Croatia, Bosnia and Herzegovina, Serbia, with smaller communities in Hungary, Montenegro, and Romania. Since today the majority of Croats wear Western-style clothing on a daily basis, the national costumes are most often worn with connection to special events and celebrations, mostly at ethnic festivals, religious holidays, weddings, and by dancing groups who dance the traditional Croatian kolo, or circle dance. 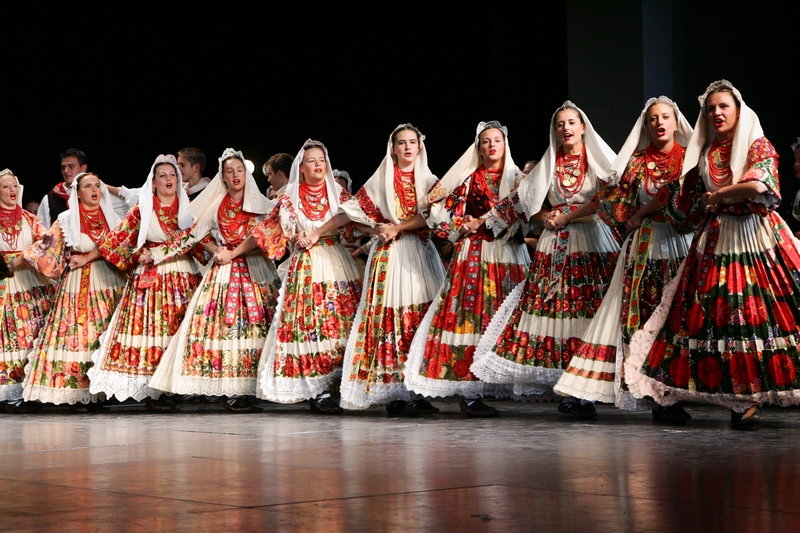 For the female dress, attire consists of a plain white dress or blouse (košulja) or underskirt (skutići), which is usually the basic form of the costume. It is then added with other clothing and decorations, which may include another overdress or skirt (kotula), a decorative jacket (djaketa, paletun or koret), apron (ogrnjač or pregjača), scarf (ubrsac), kerchief or shawl which are usually decorated with a floral or animal motif. The embroidery is very intricate and is usually red, white, blue, gold, or black. Her jewellery, ranging from necklaces, earrings, bracelets, and rings could consist of gold, silver, beads, pearls, or even corral from the Adriatic. Hair is interwoven into one or two braids and decorated with red ribbons for girls or women that are unmarried, while married women wear woven or silk kerchiefs on their heads. Costumes of brides consists of a crown or wreath often made of flowers (vijenac) and large amounts of jewelry. The woman's head could be adorned by a kerchief, cap, or a headdress, the most famous being the headdresses worn by the women from the island of Pag. The amount of paraphernalia a woman is adorned with, either very much or rarely any at all, depends on the region. Completing the costume are stockings (bječve) or knee-high socks, and boots or a special kind of sandal called opanci.

For the males, the national dress usually consists on loose, wide slacks (gače širkoke) and a shirt, and both are usually either black or white, or both. The man may wear a decorative or plain vest (fermen or jačerma), over his shirt, and possibly a waistcoat. The man almost always wears a cap, varying in shape and design depending on the region. The most famous cap is perhaps the Lika cap, worn in the Lika region for centuries by the people. Footwear, like the women's', consists mainly on boots and sandals. Because of the weather, certain places often have woolen vests, cloaks, coats, or fur for the colder regions, and silk and light linens for the warmer climates. 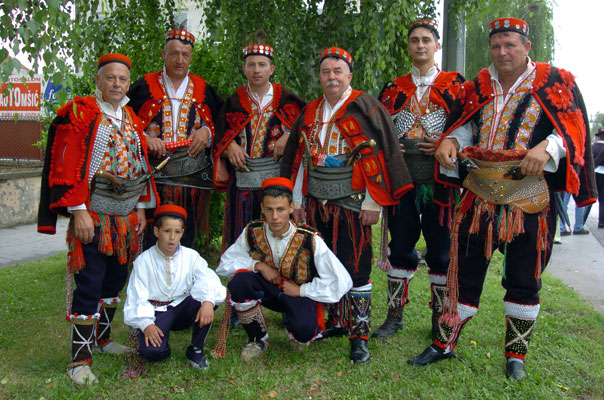 There are four main types of costumes associated with the regions: the Pannonian style in the north and east, the continental or Dinaric style, and the coastal style on the coast. 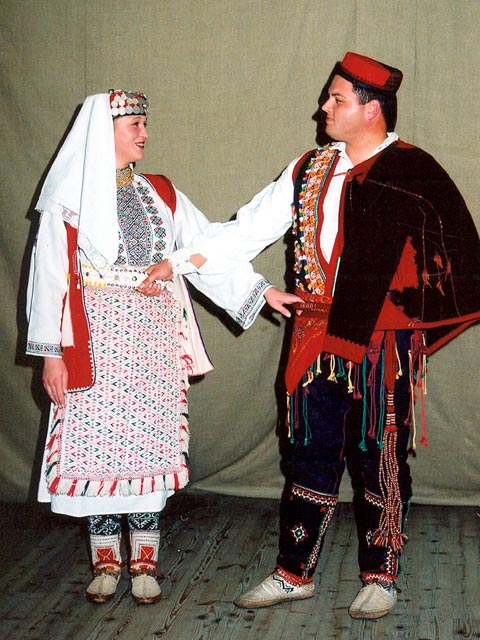 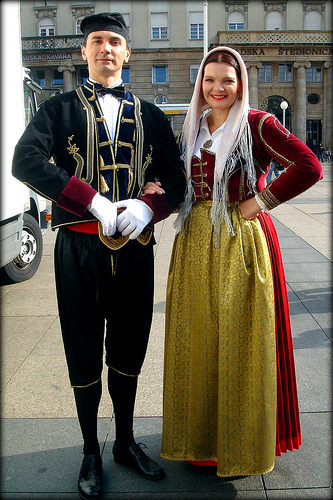