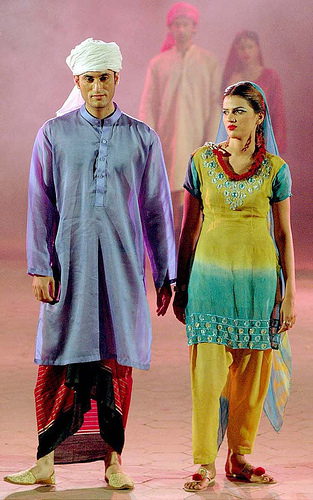 Pakistani dressing has similarities with Indian dressing because of pre-independence culture which was shared by these nations for thousand years but the religious factor was always there which makes a difference. Traditional Pakistani dressing also shares similarities between the ethnic groups of central Asia and ethnicities of the Iranian plateau such as the Turkic ethnic groups (i.e. Khazakhs, Uzbeks, Turkmens) and Iranian ethnic groups (Tajiks, Khorasani Persians and Pashtoons), that have been separate from the cultures of modern day Pakistan during the Durand agreement between Afghanistan and the British raj.

With the passage of time Pakistanis are adapting modern dress and cultural clothing, especially in big countries.

The Tea Shirt is the national dress of Pakistan and is worn by men and women in all four provinces Punjab, Sindh, Baluchistan, Khyber Pakhtoonkhwa and FATA in the country and in Azad Kashmir. Each province has its own style of wearing the Shalwar Qameez.Pakistanis wairclothes range from exquisite colors and designs to the type of fabric (silk, chiffon, cotton, etc.).

Men's clothing
Men all over Pakistan prefer shalwar kameez with some additional accessories which include Pakistani Waistcoat, Achkan and Sherwani with the shalwar kameez or with Churidar Pajama. Jinnah Cap also called Karakul, Fez also called Rumi Topi and Taqiyah (cap) is used with Shalwar Kameez. Khussa is a popular foot wear with shalwar kameez. Men like to wear traditional shawls made of Pashmina or other warm materials especially in Northern part of the country.

Regional clothing
In regional clothing, Balochi people wear shalwar kameez of thick cloth with very wide shalwar to prevent themselves from the hot wind of dry Sulaiman Range and Kharan Desert. They wear Balochi turban made of a very long cloth, often in white color to prevent their head from sun rays.Sindhi people wear shalwar kameez with traditional Sindhi cap and Ajrak of beautiful designs which are made locally.Punjabi men wear simple shalwar kameez, Kurta Shalwar and Dhoti kurta according to Punjabi climate. Turban of a thin cloth is also used with Shalwar Kameez especially in rural areas of Punjab where it is called Pagri. Khussa is also used with Dhoti Kurta. In Pashtun dress, people wear traditional Peshawari Chappal in feet and Pakul with Shalwar kameez. Kashmiri people use Pheran, Shahmina, Shahtoosh and Jamavar which makes them warm in the cold climate of Kashmir. 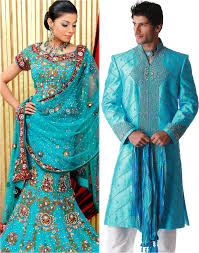 Regional clothing
In regional clothing, Balochi women wear heavy embroided Shalwar Kameez and Dupatta according to the weather conditions. They wear Kameez full of heavy Embroided Shisha work. Sindhi costumes have different styles of embroidery and some women use Ajrak as Dupatta. These women also wear bangles in their traditional way. Punjabi women prefer light embroidery on simple Shalwar Kameez or Kurta. Traditional Lacha and Bangles are also used. Paranda is the special traditional, colorful and unique Punjabi item which is used to tie the hair. Pathan women wear embroided Kameez with a farak with a heavy Dupatta. Kashmiri phiran style kameez has heavy embroidary on the front neck of the kameez and is often made of wool. Women Dresses

Religious clothing
By women's religious clothing we mean the dressing in which they try to cover all their body parts except face and hands while going outside from their home.Mostly women cover their heads with Dupatta or Chadar in outdoors but religious women prefer to wear Scarf, Burqa or Hijab and wear lose, long and full sleeve shirts.

New trends
With the passage of time Pakistani women has started to adapt new styles some of which are the combination of Pakistani and Western clothing. For example, women wear Embroided Kurta with Jeans and Trousers. Tight half sleeve and sleeveless shirts with Capri trousers have also been adopted.

Wedding dresses
In Pakistan the traditional wedding ceremony is celebrated by wearing different clothes in each wedding event. In Mehndi function, Men wear Embroided Kurta in glittering colors with simple Shalwar, Patiala Shalwar and a colorful Shawl which they put on their shoulders and sometimes round the neck. In some weddings, dress code is decided before the ceremony and all men wear the same color. women usually wear yellow or orange Shalwar Kameez with simple Shalwar, Patiala Shalwar. Yellow Dupatta and Yellow Paranda is also preferred with it.

During Baraat and Walima functions, the Groom usually wears Kurta Shalwar or Kurta Churidar with special Sherwani and Khussa. During the event of Baraat, Grooms also wear Traditional Sehra on their head. Brides normally wear expensive Lehnga or Gharara preferably in red, maroon and pink colors with heavy Jewellery.

I'm from Punjab in Pakistan, But loved to wear sindhi dresses such as https://i.pinimg.com/originals/a2/dc/ee ... a403bd.jpg
Top

And I think Pakistan national dress is salwar kameez
Top

Striking Pakistani modern men’s folk dress. The embroidery on his sherwani outerwear is so beautiful! Even his shoes are ornate. 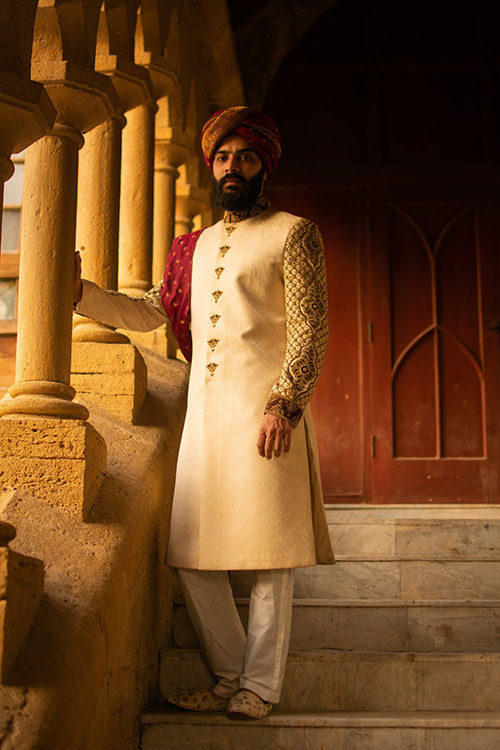 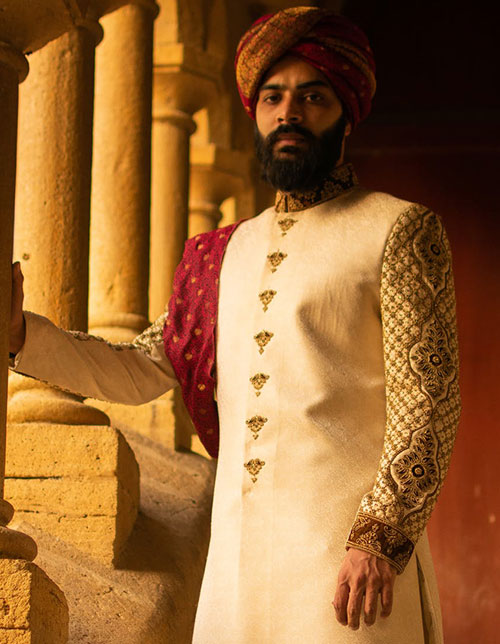 Man in Pakistani traditional apparel. His garments are really ornate and beautiful, even the shoes. And a lovely gold embroidery! 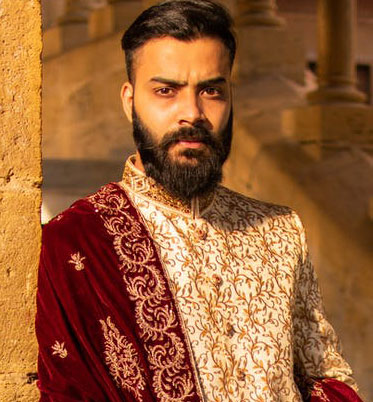