Royal clothing in Kyivan Rus’. The outfit of Anna Yaroslavna (1032/1036 – 1075/1089), daughter of Yaroslav the Wise and Ingegerd, wife of King Henry I of France. Wax figure; the clothing is accurate modern replicas of authentic pieces. Her outfit is embellished with embroidery, gems, and pearls. Also, she’s wearing a cute royal headdress. 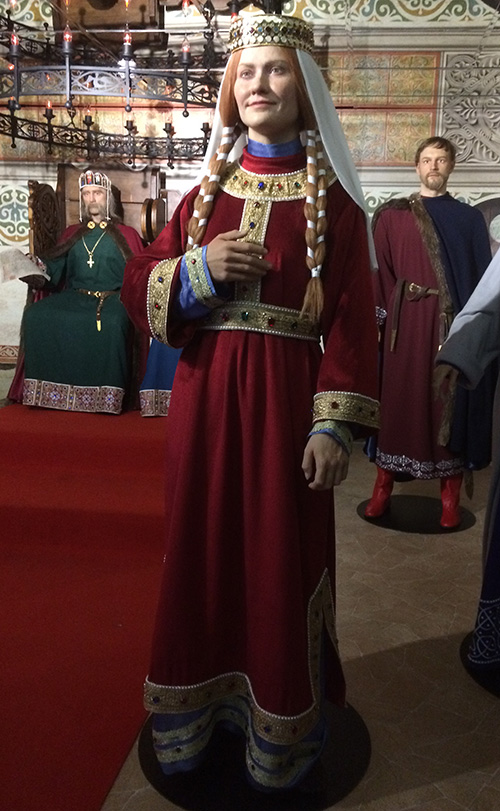 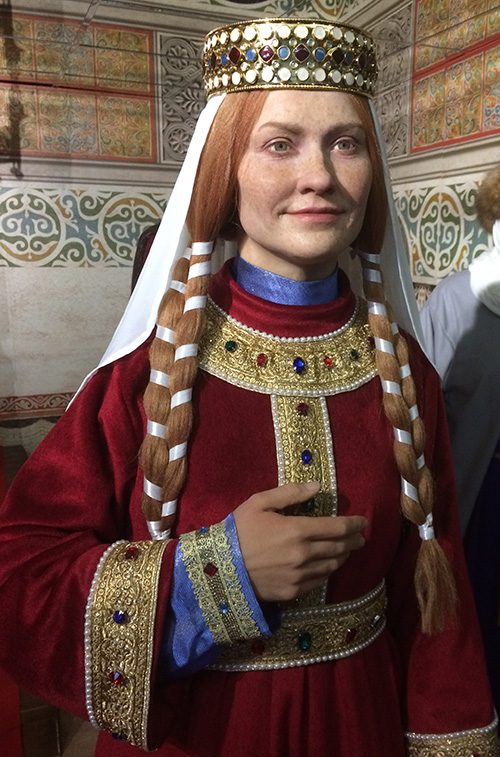 The outfits of the royal couple of Kyivan Rus’. Yaroslav the Wise (978/986 – 1054), Grand Prince of Kyivan Rus’, and Ingegerd (1002-1050), his wife, daughter of Swedish King Olof III. Wax figures; the clothing is accurate modern replicas of authentic pieces. They are wearing similar attires. The robes are adorned with embroidery and gems; his cloak is trimmed with fur and her with embroidery. She has pretty silver jewels, including temple rings, his jewelry pieces are gold (encolpion cross on a chain and a brooch). By the way, an encolpion is a cross-shaped medallion, hollow inside, filled with sacred religious items or substances – very popular jewelry in Kyivan Rus’. 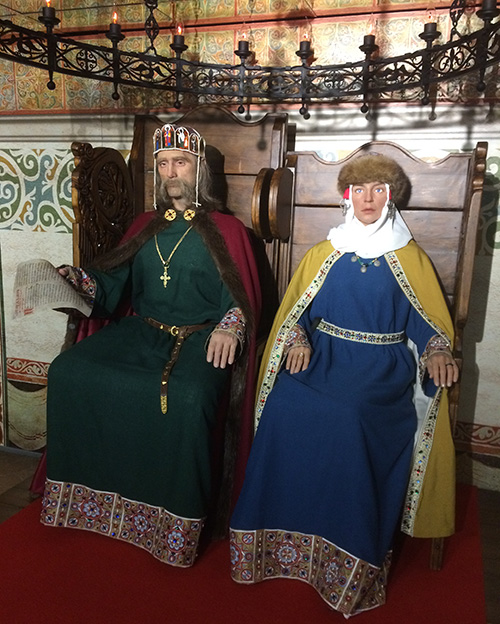 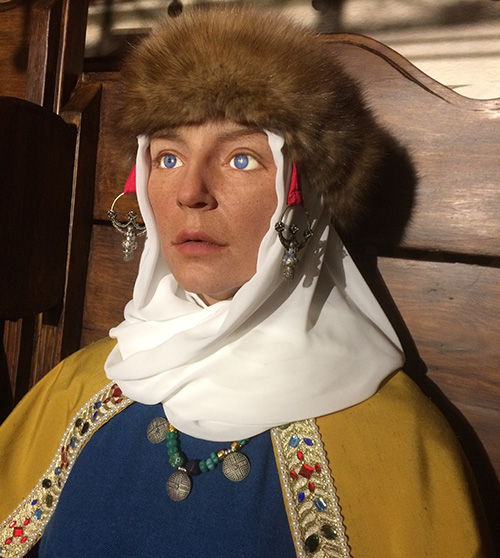 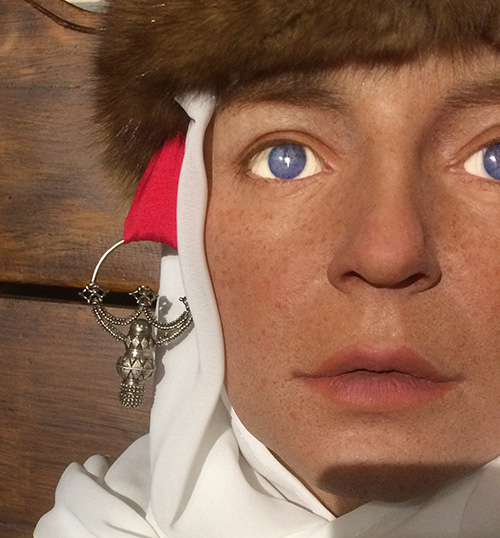 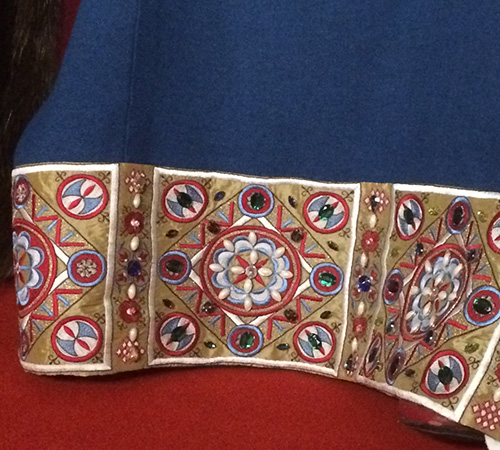 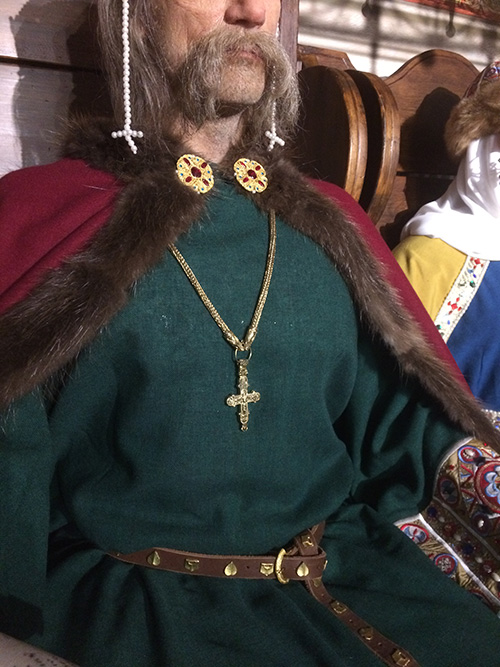 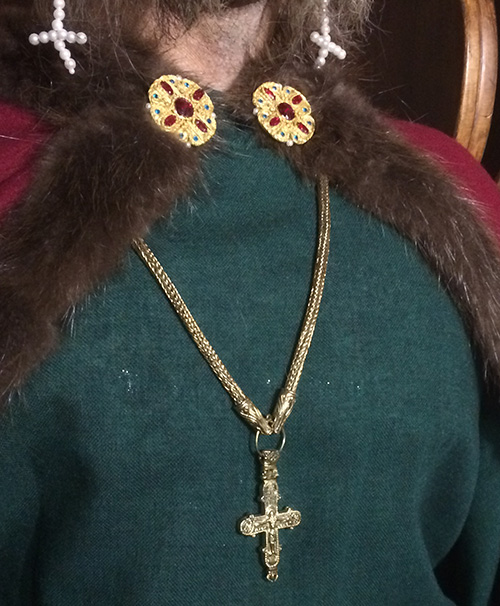 Period attire of Elisaveta Yaroslavna (1022-1067), royal woman in Kyivan Rus’, wife of Norwegian King Harald Hardrada. Wax figure; the clothing is accurate modern replicas of authentic pieces. Her dress is trimmed with pearls and gems. She is wearing a fur hat and a white veil underneath that covers the hair and neck. She has a silver brooch, silver temple rings, and a glass-beaded necklace – typical jewelry in Kyivan Rus’. Her ensemble is rather elegant and period correct. 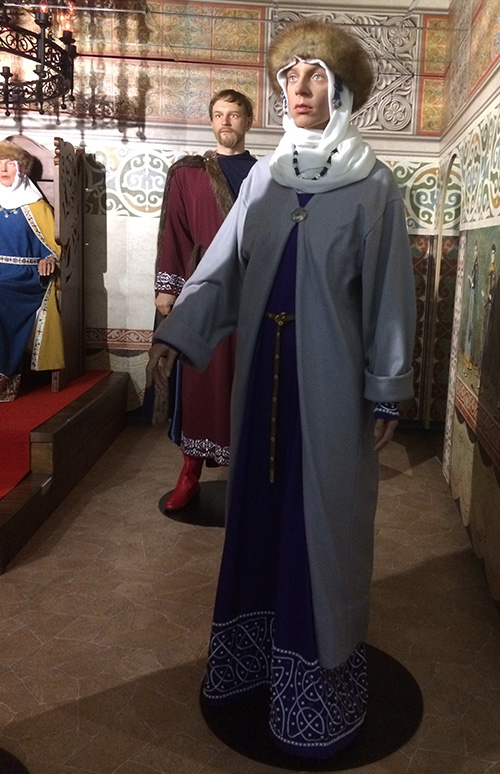 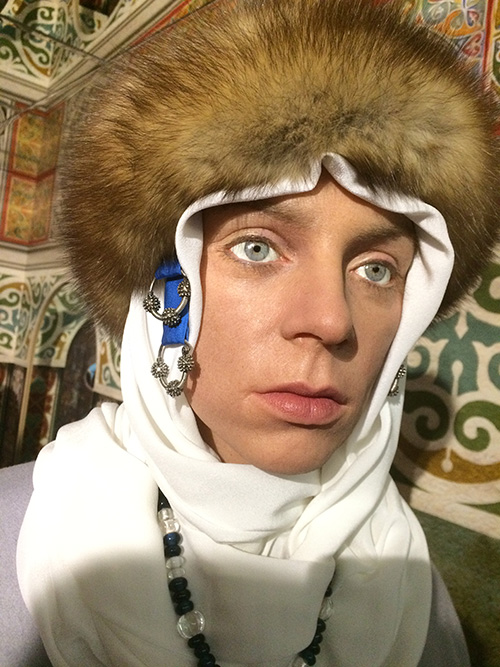 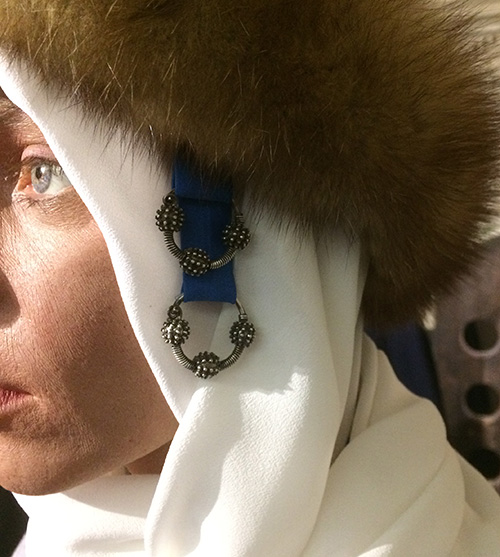 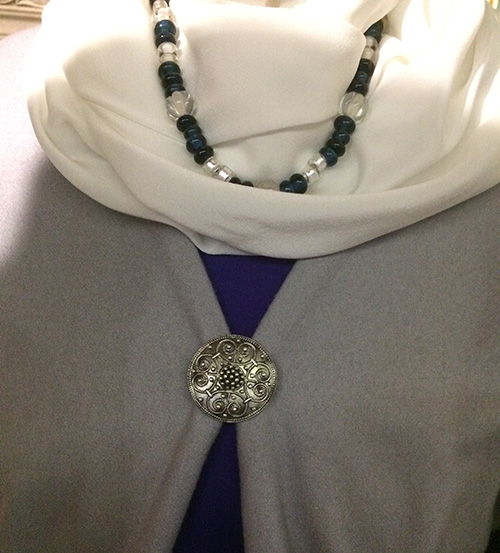 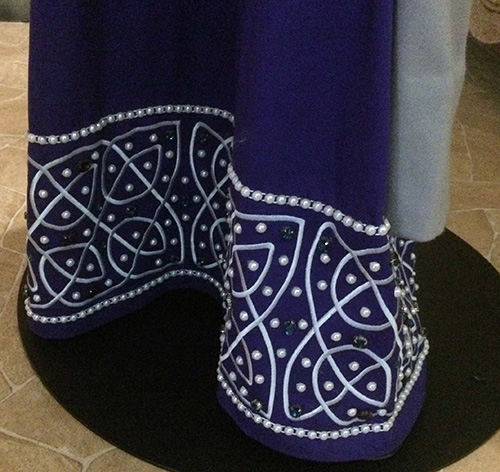 Period-accurate costume of Anastasia Yaroslavna (1023 – 1074/1094), daughter of Yaroslav the Wise and Ingegerd, wife of King Andrew I of Hungary. Wax figure; the clothing is accurate modern replicas of authentic pieces. Her outfit looks the same as other women’s. It is embellished with embroidery and gems. Anastasia has cute silver temple rings. Her hat is trimmed with fur. 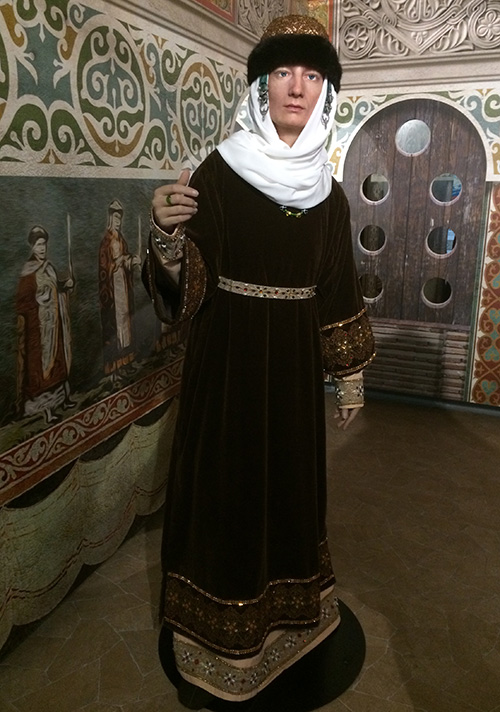 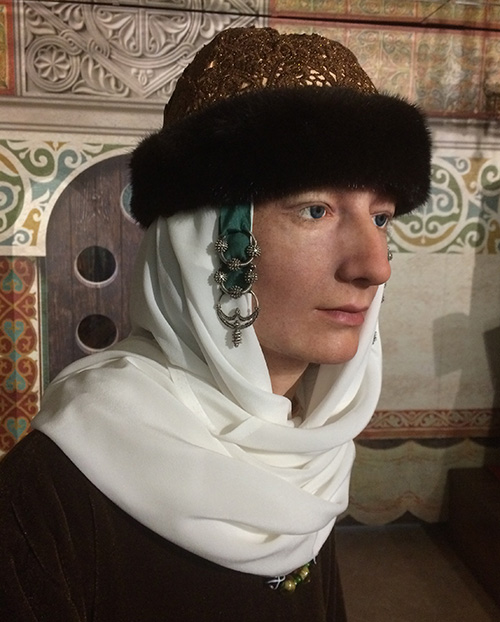 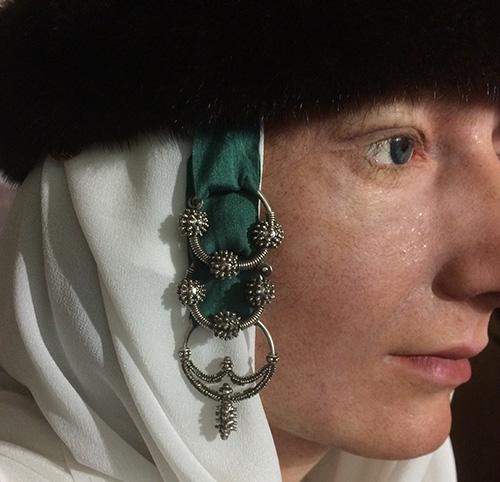 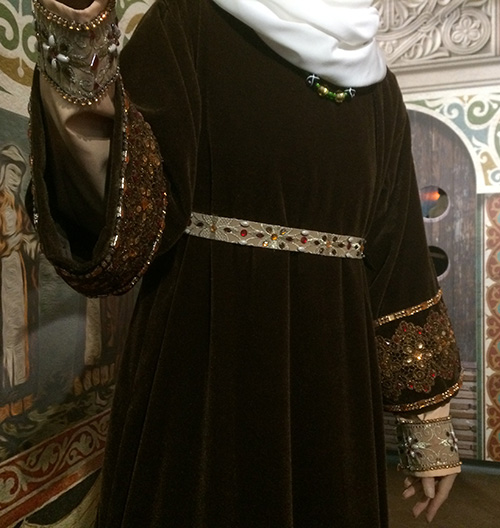 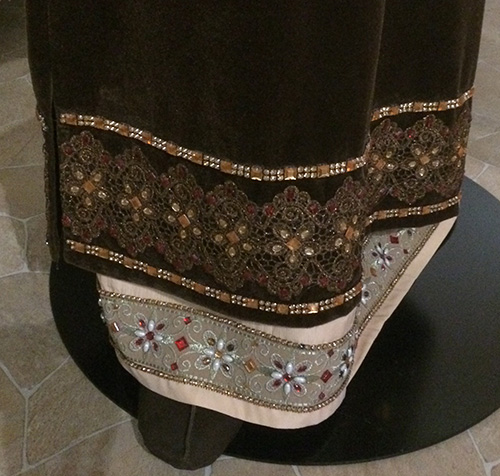 Clothing of the royal princess and her servant, Kyivan Rus or Ruthenia, the 10th century. These are wax figures of Princess Olga (902-969), princess of Kyiv, and her maid Malusha.
You can see that Olga’s clothes are multilayered. Her garments are embroidered, including the undershirt. Her headdress is typical for Kyivan Rus’, it consists of a fur-trimmed hat and a white veil that covers the hair and neck. Her shoes are made of leather and ornate. Also, she has a single jewelry item – a glass-beaded necklace with a gold crescent-shaped pendant (it was traditional and typical jewelry at the time).
Malusha is also a woman of high origin, though not as high as Olga. That’s why her outfit is similar to Olga’s, but she doesn’t wear a cloak, which was a prerogative of the royals. Malusha wears an embroidered undershirt and a tunic. She also has a white veil on her head but worn with a headband rather than a hat. Her shoes are leather as well. In a close-up, you can see that her headband is adorned with pearls and exquisite silver temple rings in the shape of a bird (by the way, temple rings were shaped differently in different regions of Ruthenia, so we can distinguish the woman’s area of origin by her temple rings). Another curious accessory is a set of keys from the palace’s doors, which she has attached to her belt. They’re much larger than our modern keys, aren’t they? 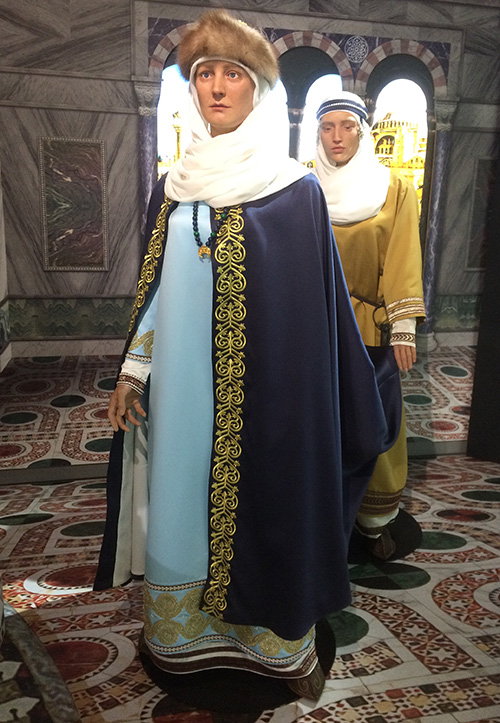 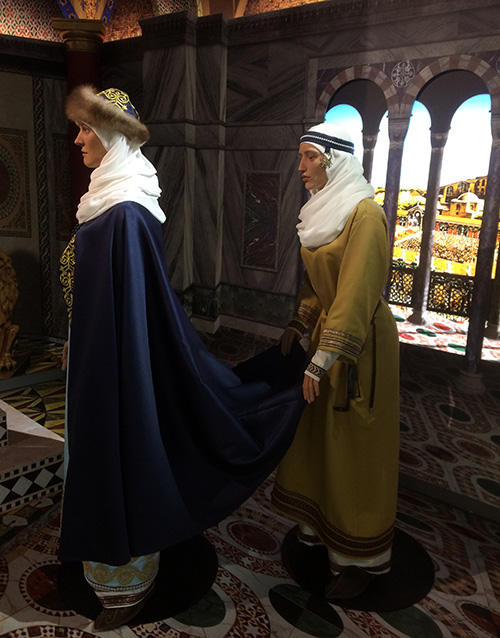 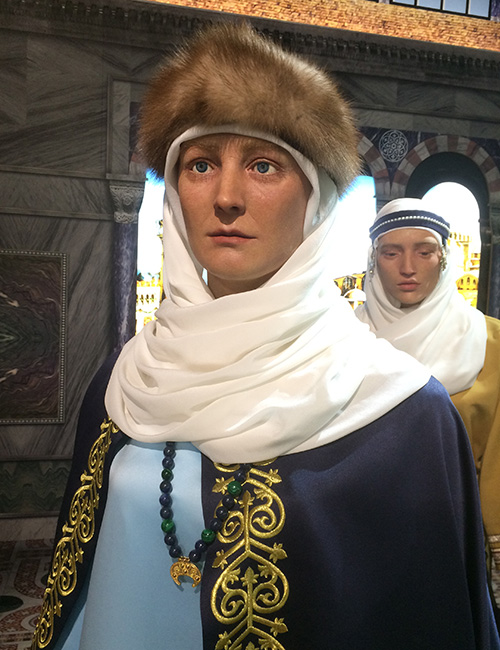 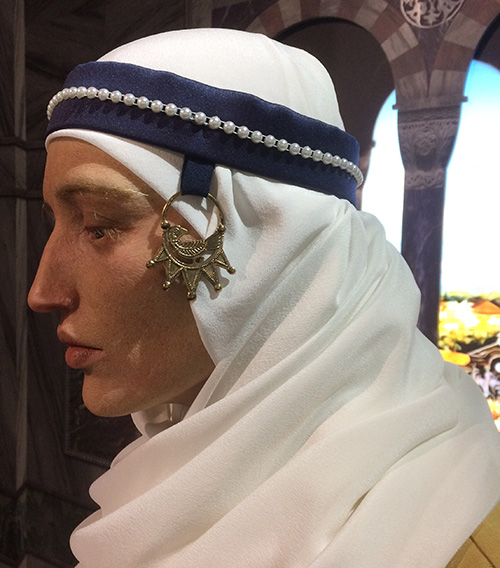 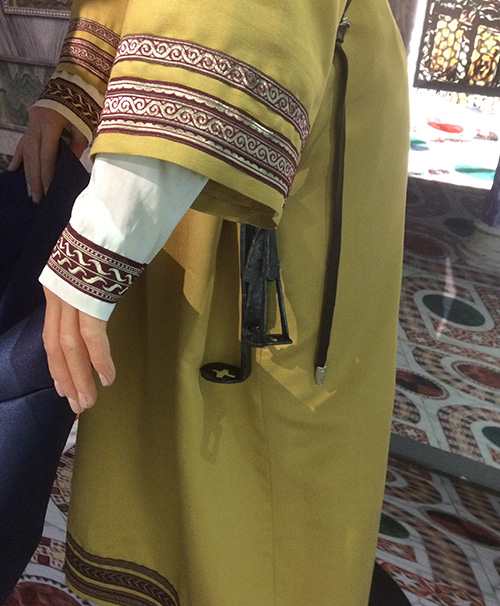