Jamaica
In Jamaica, the quadrille dress is made of cotton. It is also called a bandana skirt. The skirt is worn with a ruffled sleeve blouse and a matching head tie. The traditional dress is made out of red and white cotton plaid, maroon and white plaid, or madras. The plaid material is called bandana fabric. Men wear a shirt made out of the same fabric and white pants during quadrille and folk dances. However, for weddings, the traditional male attire is a bush jacket made of linen fabric and black dress pants or a tuxedo and the female attire is a white wedding dress. In many countries, the bush jacket is known as a guayabera. In Africa, the bush jacket is known as a safari shirt and is worn in the same manner as the safari jacket.

The quadrille is only danced in Jamaica and Trinidad today as a show. Dancers will usually wear the Jamaican folk costume, which consist of a gathered skirt of red madras bandana worn with a white peasant blouse. A matching head scarf is often worn tied in a sort of turban fashion. This costume is unlikely to be "bespoke" as it is only worn as a costume, for dancers, folk singers, tour guides etc. It represents the clothing worn by the ordinary folk in roughly the eighteenth century. Sometimes beauty pageant contestants wear creative evening dresses inspired by the national costume.

The bush jacket is hardly traditional. It was introduced for political reasons in the 1970s and some men continue to wear it as a matter of taste. Traditional attire for weddings, funerals, court dates etc. is an ordinary suit. Office attire is either a suit or shirt and tie. The bush jacket is an option one sees occasionally.

One would not expect to see the folk costume at a wedding. The groom would wear a conventional suit, the bride a fashionable white gown. Guests would wear suits and semi-formal dresses. One or two of the men may wear bush jackets.

The only occasion where a man would wear a madras shirt and white trousers would be if he were performing on the stage, either singing traditional folk songs or some sort of calypso or mento in the tourist circuit.

Haiti
In Haiti, the quadrille dress is called a karabela dress. Traditional male attire for dances, weddings, and other formal wear is the linen shirt jacket.

St. Lucia
In St. Lucia, the name of the dress is spelled Kwadril dress. 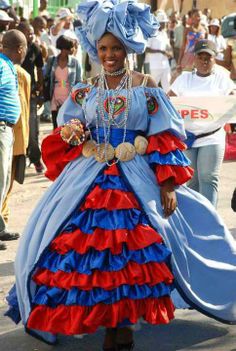 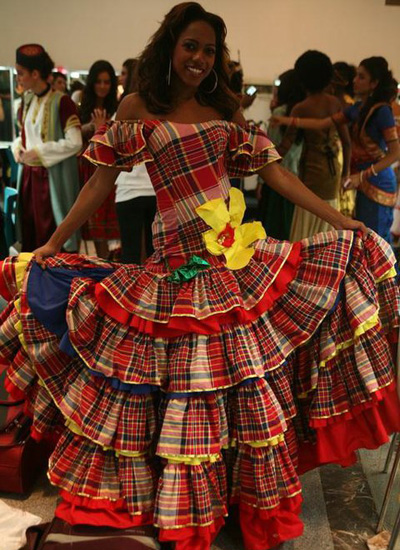