Greek men’s skirt-like garment is called “foustanella”. It is a wide and short skirt, knee-length or above the knee-length. Usually, it is black or white. Sometimes it is connected to the upper part of a garment, in other cases, a foustanella is worn like a separate piece.
It is also widely known as Greek Army Ceremonial dress.
Scholars are still arguing about the origin of this garment. Some people consider foustanella to be an authentically Greek piece, and others think that it has Albanian origin.
Nevertheless, foustanella is an outstanding and offbeat garment. It makes Greek traditional costume very unusual and interesting. 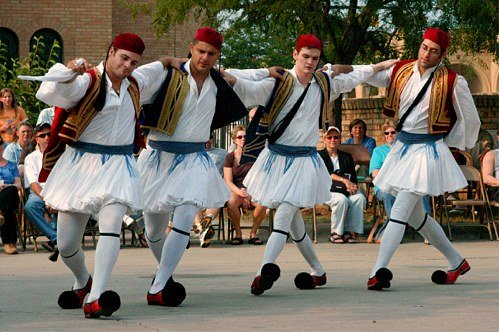