The clothing used in the ancient world strongly reflects the technologies that these peoples mastered. Archaeology plays a significant role in documenting this aspect of ancient life, for fabric fibres, and leathers sometimes are well-preserved through time. In many cultures the clothing worn was indicative of the social status achieved by various members of their society.

Ancient Egyptian clothing
In Ancient Egypt, flax was the textile in almost exclusive use. Wool was known, but considered impure as animal fibres were considered taboo, and could only be used for coats (they were forbidden in temples and sanctuaries). People of lower class wore only the loincloth (or schenti) that was common to all. Shoes were the same for both sexes; sandals braided with leather, or, particularly for the bureaucratic and priestly classes, papyrus. The most common headgear was the kaftan, a striped fabric square worn by men. Feather headdresses were worn by the nobility.

Certain clothing was common to both genders such as the tunic and the robe. Around 1425 to 1405 BCE, a light tunic or short-sleeved shirt was popular, as well as a pleated skirt.

Clothing for adult women remained unchanged over several millennia, save for small details. Draped clothes, with very large rolls, gave the impression of wearing several items. It was in fact a hawk, often of very fine muslin. The dress was rather narrow, even constricting, made of white or unbleached fabric for the lower classes, the sleeve starting under the chest in higher classes, and held up by suspenders tied onto the shoulders. These suspenders were sometimes wide enough to cover the breasts and were painted and colored for various reasons, for instance to imitate the plumage on the wings of Isis.

Clothing of the royal family was different, and was well documented; for instance the crowns of the pharaohs, the nemes head dress, and the khat or head cloth worn by nobility.

Perfume and cosmetics
Embalming made it possible to develop cosmetic products and perfumery very early. Perfumes in Egypt were scented oils which were very expensive. In antiquity, people made great use of them. The Egyptians used make-up much more than anyone else at the time. Kohl, used as eyeliner, was eventually obtained as a substitute for galena or lead oxide which had been used for centuries. Eye shadow was made of crushed malachite and lipstick of ochre. Substances used in some of the cosmetics were toxic, and had adverse health effects with prolonged use. Beauty products were generally mixed with animal fats in order to make them more compact, more easily handled and to preserve them. Nails and hands were also painted with henna. Only the lower class had tattoos. It was also fashionable at parties for men and women to wear a perfumed cone on top of their heads. The cone was usually made of ox tallow and myrrh and as time passed, it melted and released a pleasant perfume. When the cone melted it was replaced with a new one.

Wigs
Wigs were used by both sexes of the upper class. Made of real hair, they contained other decorative elements. In the court, the more elegant examples had small goblets at the top filled with perfume. Heads were shaven; shaved heads are a sign of nobility. Usually children were represented with one lock of hair remaining on the sides of their heads.

Ornaments
Wigs contained ornamental decorations. A peculiar ornament which the Egyptians created was gorgerin, an assembly of metal discs which rested on the chest skin or a short-sleeved shirt, and tied at the back. Some of the lower-class people of this time also created many different types of piercings and body decorations; some of which even included genital piercings, commonly found on women prostitutes of the time.

Jewelry
Jewels were heavy and rather bulky, which would indicate an Asian influence. The lower classes wore small and simple glassware; bracelets also were heavy. The most popular stones used were Lapis Lazuli, Carnelian, and Turquoise. They wore a large disk as a necklace of strength, sometimes described as an aegis. Gold was plentiful in Nubia and imported for jewelry and other decorative arts. 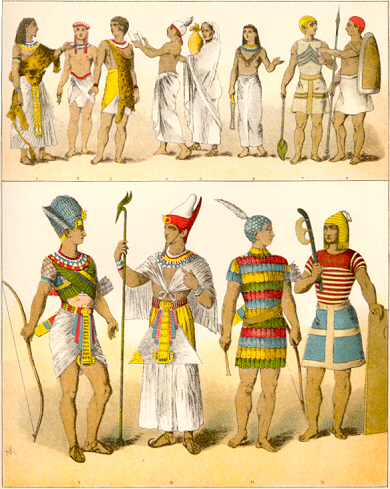 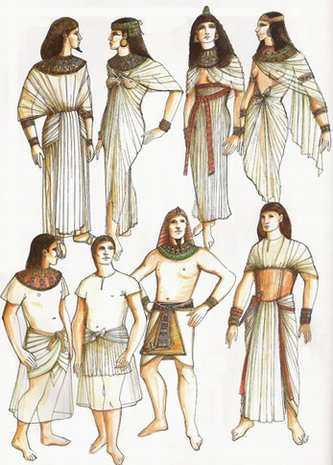 Here are several traditional costumes of European and Asian countries (the 9th-10th century): Kievan Rus' (with the center in Kyiv, Ukraine), Sweden, Denmark, Russia, and Hungary. These are the outfits of nobility, warriors, and peasants.
All of these outfits are reconstructions, though they are very accurate and archaeologically confirmed. 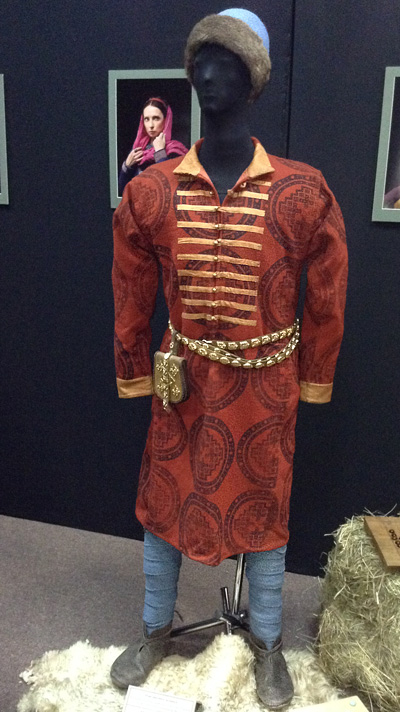 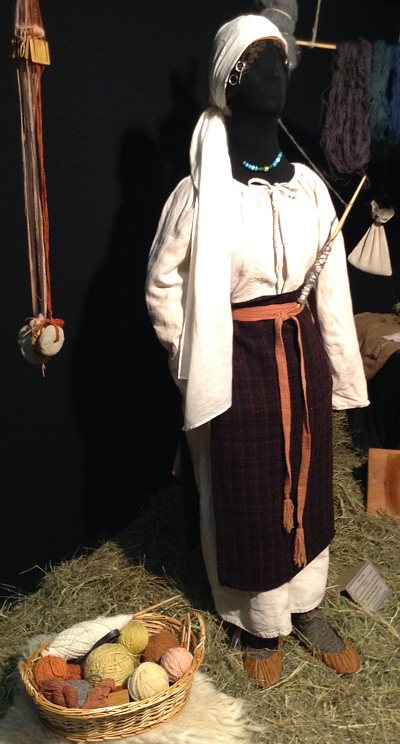 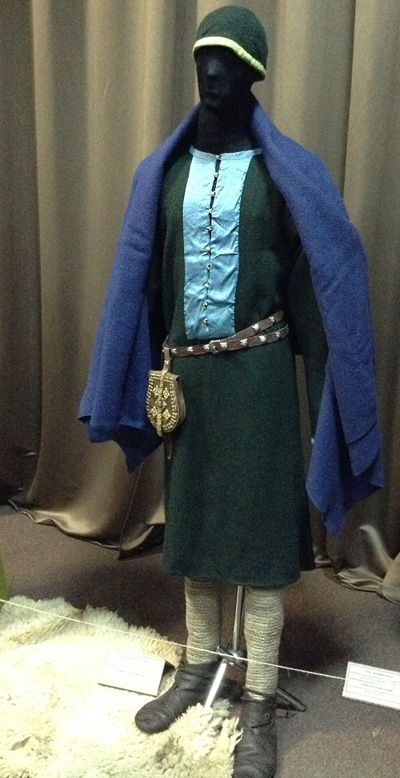 Clothes of a wealthy woman. Gotland, Sweden. The end of the 10th century. Reconstruction

Clothes of wealthy man and woman from Europe (Denmark and Sweden), the 10th century 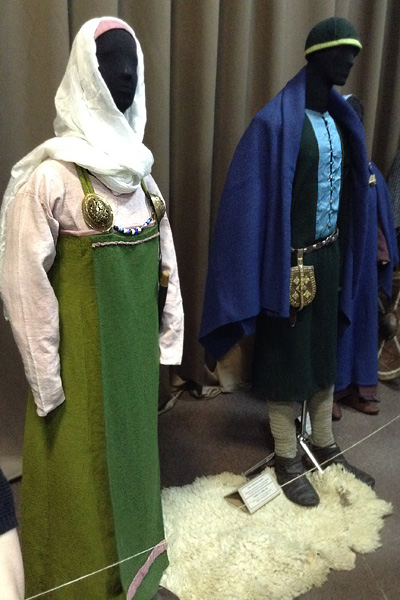 Clothes of a wealthy Asian woman. The 9th century. Reconstruction

Armor of a Hungarian warrior. Hungary. The 10th century. Reconstruction 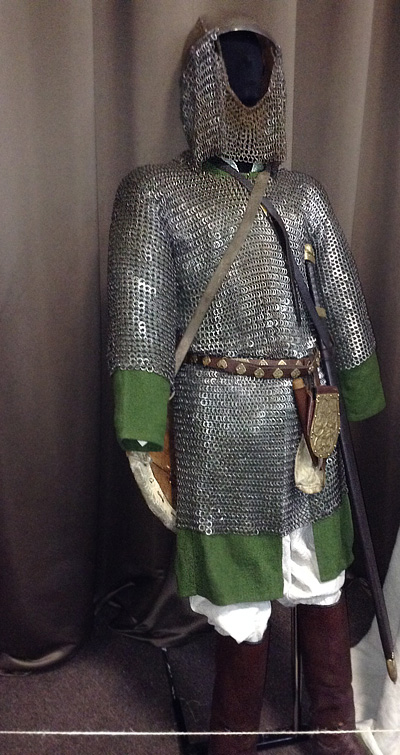 Modern reconstruction of clothing of a wealthy, noble Sarmatian woman (The Museum of Historical Treasures of Ukraine). The 1st century A.D. Her garments are adorned with gold decorations.