The Madras is made up of five individual pieces of clothing. The costume comprises a white cotton or poplin blouse, known in French Creole as a chimiz decolté or chemise decoltee, finished with Broderie Anglaise and red ribbons. The second item is an ankle length skirt, again trimmed with lace and red ribbons; which has two gathers towards the lower end of the garment. The third item is the shorter outer skirt, made of Madras material, to which the costume is named. The Madras material is used again in the fourth item, the head piece, known as the Tête en l'air or tèt anlè; a square or rectangular piece of cloth worn over the forehead and folded to display varying numbers of peaks. The head scarf can be tied in a ceremonial fashion or can be worn to show the availability of the woman in courtship, depending on the number of peaks tied into it. One peak represents that the woman is single, two that she is married, three that she is widowed or divorced, and four that she is available to any who tries. The final item is a triangular silk scarf, foulard, pinned to the left shoulder, its apex at the end of the elbow and tucked into the waist of the skirt.

The costume is traditionally worn on Independence Day, National Day and Creole Day (Jounen Kwéyòl). It is also worn when dancing the Quadrille, which has been adopted by the country as the national dance. 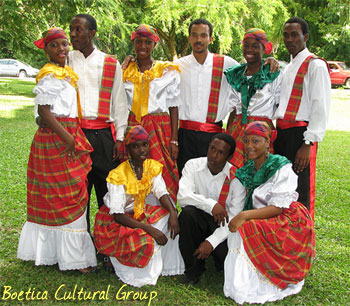