The Traditional Welsh costume is a costume once worn by rural women in Wales. The costume was identified as being different from that worn by the rural women of England by many of the English visitors who toured Wales during the late 18th and early 19th centuries. It is very likely that what they wore was a survival of a pan-European costume worn by working rural women. This included a version of the bedgown, originally worn by the gentry in the 17th and 18th centuries. The bedgown survived in Wales for longer than elsewhere in Britain. The unique Welsh hat, which first made its appearance in the 1830s was used as an icon of Wales from the 1840s.
It is likely that the Welsh costume began as a rural costume (with regional variations in Wales) and became recognized as a traditional costume by the wives and daughters of the better off farmers who wore it for special occasions and when going to market to sell their produce.
From the 1880s, when the traditional costume had gone out of general use, selected elements of it became adopted as a National Costume. From then on it was worn by women at events such as Royal visits, by choirs, at church and chapel, for photographs and occasionally at eisteddfodau. It was first worn by girls as a celebration on Saint David's Day just before the First World War. The costume is now recognised as the national dress of Wales.

The elements of Welsh costume
The gown or bedgown
The most distinctive feature of the Welsh costume, other than the hat, is the gown, often referred to as a bedgown (spelt in various ways in Welsh, most commonly now as betgwn). There were several sorts based on two forms:
(1) a tailored form with a tightly fitted low-cut top and long wide tail These were common in Cardiganshire (Ceredigion) and Carmarthenshire and possibly in parts of mid-Wales and were often made of red and very dark blue or black striped flannel which was sourced locally. A version with a shorter tail in plain fabric was found in Pembrokeshire.
(2) a loose T shaped form, rather like a kimono. The T shaped form was found in north-west and south-east Wales; these were often of printed cotton.

The skirt and underskirt (pais)
These were normally of heavy flannel with vertical or occasionally horizontal stripes in bold colours, often reds and dark blue or black and white.

The cape or mantle
There were long and often had large hoods (to cover the Welsh hat). Blue woollen cloaks were far more common than red ones in much of Wales.

The shawl
A variety of shawls were worn in Wales:
(1) Square Shawl Square shawl of wool in natural colours with a fringe all round. This was worn folded to form either a triangle or a rectangle and worn over the shoulders.
(2) Turnovers Some of the finer printed shawls were made with two adjacent edges sewn face up on one face, and the opposite way on the other two edges so that when the shawl was folded diagonally, they both appeared face up.
(3) Whittle Large rectangular or square woollen shawls with long fringes were worn around the waist and used to carry bread and other provisions. They were sometimes also worn as a mantle over the shoulders. Many of these were white or cream and occasionally red. They appear to have been more common in south Wales. A small version in red wool was worn round the shoulders in north Pembrokeshire and are said to have been worn by women who helped to repel the French during the Last invasion of Britain.
(4) Nursing shawl A large square shawl with long fringes on all sides, made of natural white or cream wool was worn around the shoulder and waist to hold a baby, freeing the hands to do other tasks. These seem to have been restricted to south Wales, but were occasionally found in Welsh expatriate communities
(5) The Paisley shawl Medium to large shawls of wool, silk or printed cotton were decorated with bright Paisley patterns. Many were fringed. Although these are thought to have been an essential part of Welsh costume, most were expensive and probably only worn for very special occasions.

The handkerchief (sometimes now referred to as a fishu) was a square piece of fabric, normally of printed cotton or linen, which was worn around the neck and tucked into the top of the gown, or worn over the head like a head scarf.
The apron was often of natural colours (white through cream and grey to black) in chequered patterns.
Many women spent a lot of time knitting stockings but most were sold for export. Before about 1850 many rural women walked barefoot to and from market, or wore footless stockings.
The cap (or mob cap) was a linen or cotton head cover with goffered folded fabrics around the face. Some had long lappets which hung down the front below shoulder level.

The Welsh hat
The distinctive feature of Welsh hats is the broad, stiff, flat brim and the tall crown. There were two main shapes of crown: those with drum shaped crowns were worn in north-west Wales and those with slightly tapering crowns were found in the rest of Wales. They were probably originally made of felt (known as beaver, but not necessarily made of beaver fur), but most surviving examples are of silk plush (also sometimes known as beaver) on a stiffened buckram base. A third type of hat, known as the cockle hat, was worn in the Swansea area. 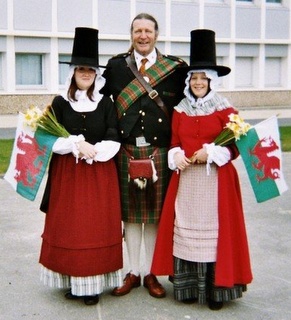