A kebaya is a traditional blouse-dress combination that originates from Indonesia and is worn by women in Indonesia, Malaysia, Brunei, Burma, Singapore, southern Thailand, Cambodia and the southern part of the Philippines. It is sometimes made from sheer material such as silk, thin cotton or semi-transparent nylon or polyester, adorned with brocade or floral pattern embroidery. A kebaya is usually worn with a sarong or batik kain panjang, or other traditional woven garment such as ikat, songket with a colorful motif.

The kebaya is the national costume of Indonesia, although it is more accurately endemic to the Javanese, Sundanese and Balinese peoples.

Costume components
The quintessential kebaya is the Javanese kebaya as known today is essentially unchanged as noted by Raffles in 1817. It consists of the blouse (kebaya) of cotton, silk, lace, brocade or velvet, with the central opening of the blouse fastened by a central brooch (kerongsang) where the flaps of the blouse meet. Traditional kebaya had no buttons down the front. A typical three-piece kerongsang is composed of a kerongsang ibu (mother piece) that is larger and heavier than the other two kerongsang anak (child piece). Kerongsang brooch often made from gold jewelry and considered as the sign of social status of aristocracy, wealth and nobility, however for commoners and peasant women, simple and plain kebaya often only fastened with modest safety pin (peniti).

The blouse is commonly semi-transparent and worn over the torso wrap or kemben. The skirt or kain is an unstitched fabric wrap around three metres long. The term sarong in English is erroneous, the sarung (Malaysian accent: sarong) is actually stitched together to form a tube, like a Western dress- the kain is unstitched, requires a helper to dress (literally wrap) the wearer and is held in place with a string (tali), then folded this string at the waist, then held with a belt (sabuk or ikat pinggang), which may hold a decorative pocket.

Varieties
There are two main varieties. The blouse, known as baju kebaya may be of two main forms: the semi-transparent straighter cut blouse of Java, Bali, and the more tightly tailored Sunda kebaya. The more Islamic compatible, plainer baju kurung is a loose-fitting, knee-length long-sleeved blouse worn in the more Muslim areas, including the former Kingdom of Johor-Riau (now Malaysia), Sumatra and parts of coastal Java.

In Java, Bali and Sunda, the kain is commonly batik which may be from plain stamped cotton to elaborately hand-painted batik tulis embroidered silk with gold thread. In Lampung, the kain is the traditional tapis, an elaborate gold-thread embroidered ikat with small mica discs. Sumatra, Flores, Lemata Timor, and other islands commonly use kain of ikat or songket. Sumba is famous for kain decorated with lau hada: shells and beads.

In Malacca, Malaysia, a different variety of kebaya is called "nyonya kebaya" and worn by those of Chinese ancestry: the Peranakan people. The Nyonya kebaya is different in its famously intricately hand-beaded shoes (kasut manek) and use of kain with Chinese motive batik or imported printed or hand-painted Chinese silks. Other than Malacca, the nyonya kebaya is also popular in other straits settlements; Penang and Singapore.

In Java, the kebaya worn by ladies of Chinese ancestry is called kebaya encim, derived from the name encim or enci to refer to a married Chinese woman. It was commonly worn by Chinese ladies in Javan coastal cities with significant Chinese settlements, such as Semarang, Lasem, Tuban, Surabaya, Pekalongan and Cirebon. It marked differently from Javanese kebaya with its smaller and finer embroidery, lighter fabrics and more vibrant colors, made from imported materials such as silk and other fine fabrics. The encim kebaya fit well with vibrant-colored kain batik pesisiran (Javan coastal batik).

During Dutch colonization of the island, European women began wearing the less restrictive and cooler kebaya as a formal or social dress. European women wore shorter sleeves and total length cotton in prints.

The day kebaya of the Indo Eurasians was of white cotton trimmed with European handmade lace, commonly from Bruges or the Netherlands, Brazil and black silk for evening wear.

Modern usage and innovations
Apart from traditional kebaya, fashion designers are looking into ways of modifying the design and making kebaya a more fashionable outfit. Casual designed kebaya can even be worn with jeans or skirts. For weddings or formal events, many designers are exploring other types of fine fabrics like laces to create a bridal kebaya.

Modern-day kebaya now incorporate modern Western tailoring innovations such as clasps, zippers and buttons zippers being a much appreciated addition for ladies' requiring the bathroom, without requiring being literally unwrapped by a helper- to the extent the true kain is near unanimously rejected. Other modern innovations have included the blouse baju kebaya worn without the restrictive kemben, and eve the kebaya blouse worn with slacks or made of the fabric usually for the kain panjang. The female flight attendants of Malaysia Airlines and Singapore Airlines also feature batik kebaya as their uniforms.

The female uniform of Garuda Indonesia flight attendants is a more authentic modern interpretation. The kebaya is designed in simple yet classic kartini style kebaya derived from 19th century kebaya of Javanese noblewomen. The kebaya made from fire-proof cotton-polyester fabrics, with batik sarongs in parang or lereng gondosuli motif, which also incorporate garuda's wing motif and small dots represent jasmine. 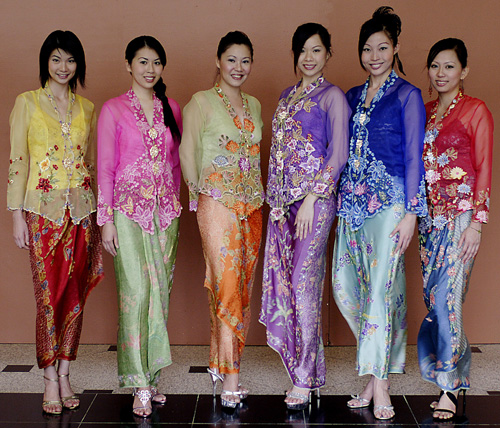